“If our Founding Fathers wanted us to care about the rest of the world, they wouldn't have declared their independence from it.”

Last week, the Wall Street Journal released the results of a new poll on Americans view of foreign policy. As is often the case with foreign affairs, Americans seem to simultaneously desire tougher engagement and greater isolationism.

55 percent of those surveyed believed that “We need a president who will present an image of strength that shows America's willingness to confront our enemies and stand up for our principles." Indeed, as applied to President Obama, 36 percent of respondents agreed that “He is too cautious and lets other countries control event,” compared to only 15 percent who claimed he is “too bold and forces issues with other countries.”

At the same time, 47 percent of Americans are calling for a “less active” foreign policy, with only 19 percent calling for a more active policy.

Isolationism has been a theme throughout American history, on both sides of the political spectrum. Even God Bless America seems to promote this view, its opening line referencing the storm clouds gathering “far across the sea.”

After over a decade of war in Iraq and Afghanistan (one of which was launched/fought under ostensibly false pretenses) and the longest recession since the Depression, it’s understandable that many would seek strength through a retreat from global affairs. 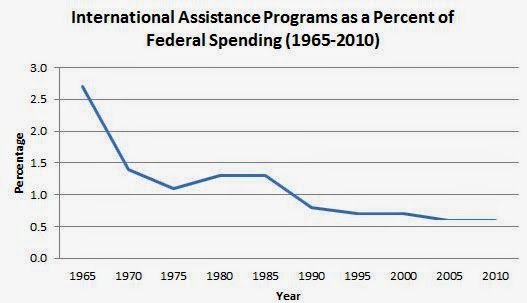 And yet, the views of the majority of Americans are informed by a gross misunderstanding of what foreign aid is and how much of our budget it makes up. As shown in the chart at left from the Center for Global Development, the percentage of the federal budget going to foreign aid has declined significantly over the past half century.

Despite this clear trend, Americans consistently believe that the U.S. spends over one quarter of its entire budget on foreign aid (see chart from a recent survey conducted by the Kaiser Family Foundation). Indeed, only four percent correctly stated that foreign aid makes up one percent or less of the federal budget. 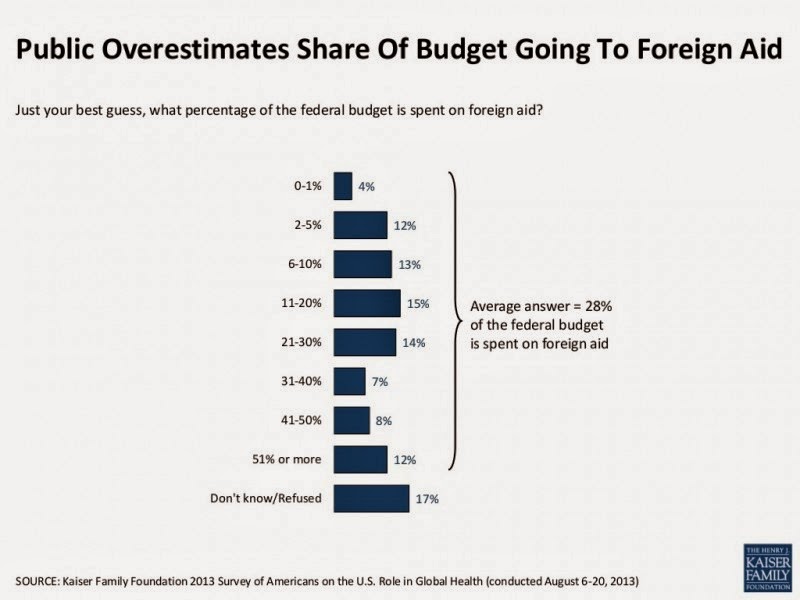 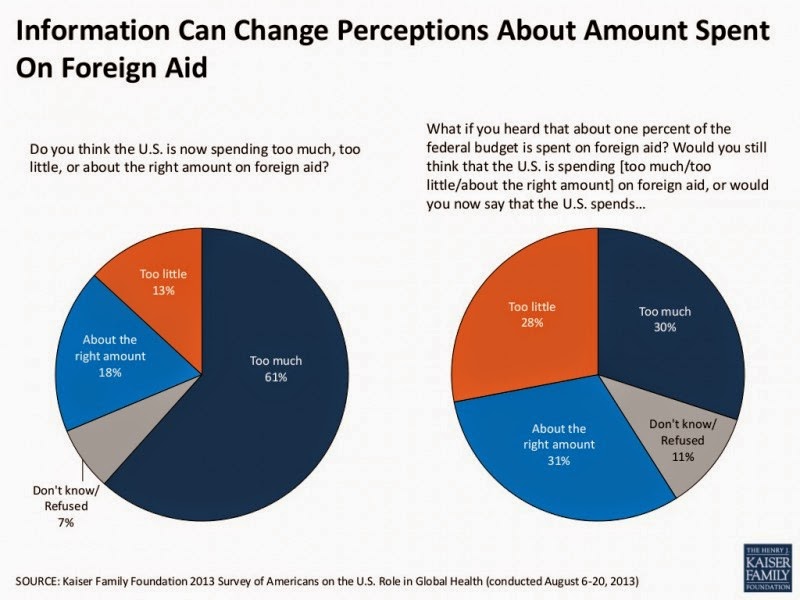 Lest one think that the facts are irrelevant to the public’s consideration of foreign aid, consider that Kaiser found a dramatic shift in sentiment when Americans are told about the actual facts.

Armed with the facts, citizens change their views—a lesson policymakers could learn to emulate—and indeed, they are right to do so, not only because America has a duty to play a leadership role in combating global poverty, but because many elements of foreign aid have proven to be some of the most effective uses of government funds.

In its 2014 annual letter, the Bill and Melinda Gates Foundation calculated that since 1980 alone, foreign aid has helped to save 100 million children at an average cost of about $5,000 per life: a bargain so good the only question is why we don’t do more.

As America continues to look back at our own Civil War at its 150th anniversary, I’m reminded of what John Stuart Mill wrote in The Contest in America in 1862:

War is an ugly thing, but not the ugliest of things: the decayed and degraded state of moral and patriotic feeling which thinks that nothing is worth a war, is much worse…A man who has nothing which he is willing to fight for, nothing which he cares more about than he does about his personal safety, is a miserable creature who has no chance of being free, unless made and kept so by the exertions of better men than himself. As long as justice and injustice have not terminated their ever-renewing fight for ascendancy in the affairs of mankind, human beings must be willing, when need is, to do battle for the one against the other.

While the battles of Baghdad and Kabul come to a close, the war on preventable disease and extreme poverty wage on. Are we willing to fight to end those scourges, if not with blood, than with treasure?

We ought to be, and not because there isn’t suffering in our own backyards that demands our concern and attention—there is—but rather because our lives and liberty are degraded by casting aside our gaze and pretending like our wealth is ours to hoard, rather than a tool to be used to bring justice, peace, and a modicum of dignity to all people, everywhere.