Late Off the Blocks: Head Start and the Formative Years

The study found that the average low-income child heard just over 600 words per hour, less than half the average total of working class children (1251/hour), and less than one-third that of the average child in a professional family (2153/hour). Using some rudimentary arithmetic, the researchers projected that wealthy kids heard about 30 million words by age 3, while poor kids heard only 10 million. 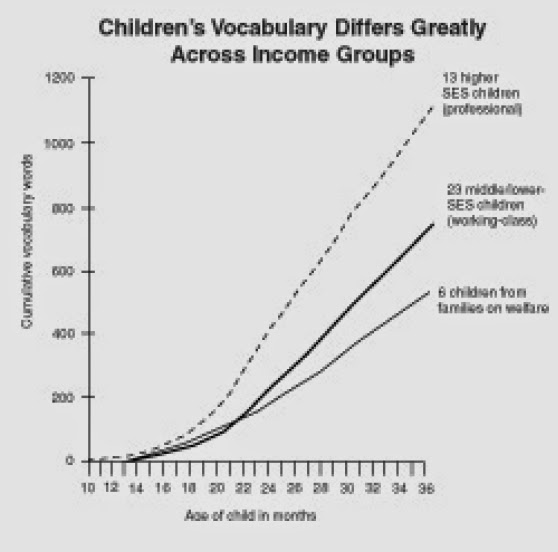 This divergent led to what the researchers described as an “even-widening gap” between poor and wealthy children, whereby the poor children not only “had smaller vocabularies than did children of the same age in professional families, but they were also adding words more slowly.”

More recent science also supports this conclusion. A 2013 study out of Stanford found that children in different socio-economic groups display dramatic differences in their vocabularies by 18 months.

Thus, it should come as little surprise that Head Start—the pioneering Great Society program designed to improve early learning for poor children—has had limited success in closing the achievement gap. As noted in a column by UC-Berkeley Professor David Kirp this weekend, despite recent improvements to the program, “a 2012 federal evaluation that used gold-standard methodology and concluded that children who participated in Head Start were not more successful in elementary school than others.”

Kirp goes on to argue that one of the essential flaws in Head Start is that it only applies to poor students, in part because branding Head Start as a program for the poor weakens its political power, but more importantly because it concentrates the effects of poverty rather than allowing poor students to interact with and learn from their better educated peers. This interaction has been shown to help poor students narrow the vocabulary/literacy gap with their more well to do contemporaries without hurting the more privileged group.

While socioeconomic mixing in early childhood education can help to mitigate the effects of the “word gap”, we need to do more to narrow/eliminate the gap from emerging in the first place. This means placing a greater emphasis on the formative years 0-3, as well as providing new parents with the skills and tools they need to succeed. Simply put, Head Start is getting out of the proverbial blocks too late for many students to catch up.

Creating children may come naturally to humans, but parenting those children is anything but. And yet despite the incredible importance and difficulty of parenthood, government offers little in the way of supports for soon-to-be or new parents.

One program that has been effective in not only boosting pre-natal care but in improving parenting practices, is Early Head Start (EHS). Launched in 1995, EHS is designed to assist low-income women and families on a variety of childhood development/parenting mattes. A major study of the program in 2005 found that EHS children “performed better than did control children in cognitive and language development, displayed higher emotional engagement of the parent and sustained attention with play objects, and were lower in aggressive behavior. Compared with controls, Early Head Start parents were more emotionally supportive, provided more language and learning stimulation, read to their children more, and spanked less.”

[As previously noted in this space, Early Head Start or similar programs are perfect vehicles for Social Impact Bond financing.]

This conclusion isn’t surprising given that the vast majority of parents want to do well by their kids—they simply need the tools to do so.

Indeed, the fact that many parents do not read to their children as much as would be ideal is not a “choice” in the traditional sense of the term. Not only are many parents unaware of the benefits of frequent verbal interaction with infants, but they also may lack the resources needed to simply have books/newspapers in the home to read.  For instance, parents who are given books and “prescriptions for reading” by their children’s pediatricians have been found to be four times more likely to read and share books with their children.

This fall, New York City will introduce universal pre-K for the first time. It’s a huge step for equity and opportunity for our city’s youth and it is one of many bold ideas that Mayor de Blasio is putting into motion. But even as we navigate the challenges of pre-K, we should be planning for that next great leap forward in early childhood education—to the formative years where the gap first emerges—so that when the starting gun of life goes off, all children can get out of the blocks.
Posted by Andrew L. Kalloch at 8:00 AM