Transparency and Tyranny of the Majority

“Anonymous pamphlets, leaflets, brochures and even books have played an important role in the progress of mankind… It is plain that anonymity has sometimes been assumed for the most constructive purposes.”

In January 1776, a short pamphlet titled Common Sense hit the streets of Boston and other cities and towns throughout the New World, calling on people to take up arms against Britain in a fight for independence. Within months, it became one of the most widely read books in the colonies. 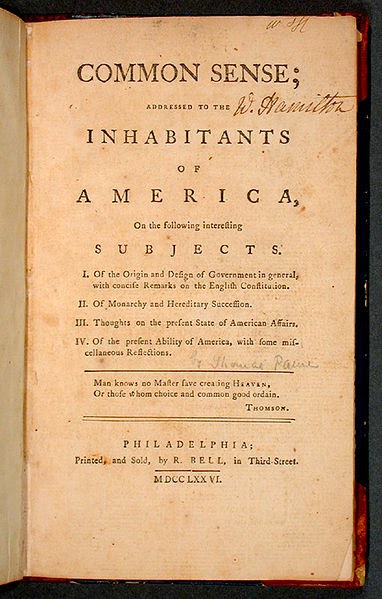 Given that its very content was treasonous, the pamphlet was published anonymously, with knowledge of its true author (the patriot Thomas Paine) remaining a secret into the spring of the year of Independence.

This week, NYC Councilmember Ben Kallos (D-East Side/Roosevelt Island) introduced a bill to create a centralized, public, online freedom of information law (FOIL) system in the City of New York. As reported in the Gotham Gazette, “Requests would be entered electronically and anyone would be able to see who is requesting what information from which agency.” Other cities—from Oakland to Chicago—already make names of FOIL requesters public. And indeed, in New York State, FOIL requests themselves are public documents subject to disclosure without redaction.

Nevertheless, Kallos’ bill is likely to raise questions about the intersection between government transparency and personal privacy. When should citizens be forced to disclose their communications with government? Are there circumstances in which anonymity is needed to avoid unwarranted harassment?

These questions continue to pose challenges, not just with regard to FOIL, but also in the context of campaign finance disclosure—as discussed by Globe columnist Scot Lehigh last week—and lobbying disclosure.

Indeed, New York’s Joint Commission on Public Ethics (JCOPE), which under a 2011 law is responsible for determining whether a particular advocacy organization should receive an exemption from disclosure if their donors faced “harm, threats, harassment, or reprisals” because of their support, has had to grapple with the implications of a subjective regime of anonymity.

Many groups across the political spectrum (from abortion rights groups to the conservative New Yorkers for Constitutional Freedoms) have sought exemptions, including the New York Civil Liberties Union, which is typically on the side of transparency (disclosure: NYCLU is a former employer).

While you could be forgiven for thinking that these groups are simply trying to protect their donor base, regardless of the actual threat posed, there are very real reasons to worry about the effects that full and complete disclosure of this kind would have on speech in America.

More than 50 years ago, the Supreme Court first discussed the importance of anonymous speech in Talley v. California, 362 U.S. 60 (1960), which struck down a Los Angeles ordinance forbidding the distribution of literature without the name and address of the individual(s) who prepared/distributed it. The Court opinion was framed by two major goals—to prevent retaliation against unpopular views and to encourage free and open dialogue.

Protections for anonymous speech are vital to democratic discourse. Allowing dissenters to shield their identities frees them to express critical minority views…Anonymity is a shield from the tyranny of the majority… It thus exemplifies the purpose behind the Bill of Rights and of the First Amendment in particular: to protect unpopular individuals from retaliation…at the hand of an intolerant society.

We may well believe that there is no good reason for corporations or deep-pocketed donors to be able to “hide in the shadows” or no good reason why an individual’s request of their government should be protected from public scrutiny, but America has a strong tradition of supporting anonymous speech on matters of public controversy.

As we continue the effort to improve the free flow of information and respond to the flood of money in politics unleashed by Citizens United and McCutcheon, we must not allow our desire to strengthen our democracy to undermine this essential bulwark of free and robust speech.
Posted by Andrew L. Kalloch at 8:00 AM