More and Less: Justice and the Plight of the Poor

“With the help of well-designed experiments, you can see glimmers of moral thought, moral judgment and moral feeling even in the first year of life. Some sense of good and evil seems to be bred in the bone.”

This week, Annie Lowrey of the New York Times wrote a terrific, front-page story on how the poor in America have much greater access to material goods than in generations past, yet feel as if they are falling farther and farther beyond the middle class. As James Ziliak, director of the University of Kentucky’s Center for Poverty Research, stated, “Without a doubt, the poor are far better off than they were at the dawn of the War on Poverty. But they have also drifted further away.”

If people are better off, why does it matter if they’ve “drifted away” from the middle and upper classes on a relative scale? If the rising tide lifts all ships, what difference does it make if some seas rise faster and taller than others?

As it turns out, it makes every difference in the world—and not just in America, but also across most societies in every corner of the globe. Why? Because rising inequality, no matter how improved the objective standard of living is for individuals across the board, offends something deep within us—an innate sense of fairness, justice, and opportunity.

As Paul Bloom wrote in 2010, “You won’t find a society where people don’t have some notion of fairness, don’t put some value on loyalty and kindness, don’t distinguish between acts of cruelty and innocent mistakes, don’t categorize people as nasty or nice.” 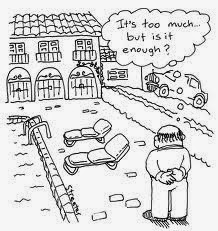 As a result, it should come as no surprise that people are frustrated—even enraged—by how an emphasis on conspicuous consumption has replaced a more fulfilling vision of the American Dream with a vacuous conception of liberty and success.

For far too long, American policymakers have focused on “expanding the pie”, as if GDP growth was gospel sent down from on high—the embodiment of our collective pursuit of happiness. As we’ve explored in this space, however, achieving happiness is a much more complicated task than economic growth. It requires a deep understanding of human nature; a critical examination of the true material needs (as opposed to wants) of individuals, and a commitment to investing in the foundational elements of true prosperity—the infrastructure of opportunity.

That infrastructure is physical—inter-city high-speed rail, urban mass transit, affordable housing, reliable water/gas delivery, clean power—and human—education from K-graduate school, social institutions, mobility (where health care attaches to you as a human rather than an employee), and substantive and procedural justice.

Erecting this infrastructure is a mission statement that acknowledges that government’s primary role is to lay the groundwork (including a robust social safety net) for people to life the lives they’ve imagined, but that the State must also take aggressive steps, as necessary, to allay levels of inequality that threaten to create a “gilded class” (if Thomas Piketty is right that, over time, the rate of return on capital is greater than the growth rate of the economy, then individuals who start with capital are very likely to accumulate more) and undermine the citizenry’s belief in the very idea of Republican government.

While the incredible reduction in extreme poverty worldwide has brought billions of people the bare necessities of life, there remain 1.2 billion people living on less than $1.25 per day. These individuals remain in desperate need of economic growth and actions to address inequality. As the Economist noted last year, “Growth alone does not guarantee less poverty. Income distribution matters, too.” Indeed, while two thirds of the fall in extreme poverty was the result of economic growth; one-third came from greater equality.

As the cartoon above implies, the world has enough—enough to feed the hungry and shelter the homeless, enough to treat the sick and heal the injured. However, that bounty means little unless extreme poverty is eradicated in the developing world (an achievable goal by 2030) and unless the developed world creates an infrastructure of opportunity commensurate with our innate belief that all people deserve an equal chance to succeed.
Posted by Andrew L. Kalloch at 8:00 AM