A Civil Right All Its Own: Same-Sex Divorce in America

“While the laws of divorce provide clear and reasonably predictable guidelines for child support, child custody, and property division on dissolution of a marriage, same-sex couples who dissolve their relationships find themselves and their children in the highly unpredictable terrain of equity jurisdiction.”

Over ten years ago, the Supreme Judicial Court of Massachusetts ruled, by a 4-3 vote, that “barring an individual from the protections, benefits, and obligations of civil marriage solely because that person would marry a person of the same sex violates the Massachusetts Constitution.” It was a historic decision—the first of many over the past decade that has seen marriage equality spread to 17 states and the District of Columbia (see map). 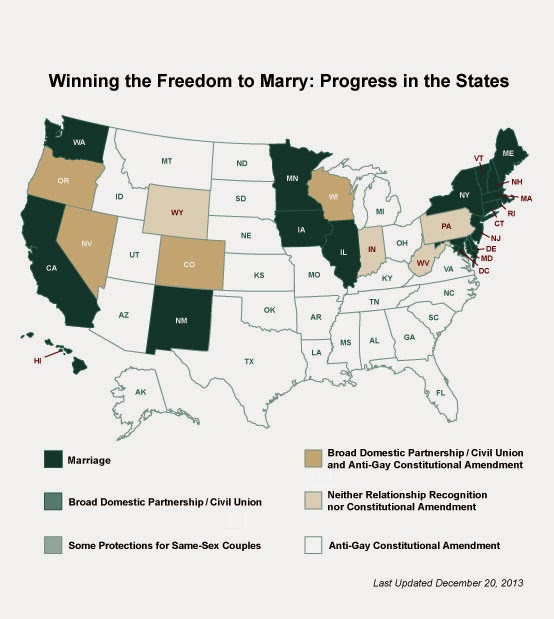 While Goodridge will forever stand as a monument in America’s march toward equal justice, the relationship that spawned the lawsuit was—like many marriages—not as eternal. Two years after the ruling, the Goodridges split, with divorce coming three years later.

Unlike marriage, divorce does not lend itself to the same sweeping statements about American liberty. Indeed, while the SJC and the Supreme Court have long waxed poetic about the right to marry, there has been nary little ink spilled about the right to divorce.

And yet, there is no questioning it’s importance—as the SJC noted in the quotation from Goodridge excerpted above.

Today we’re going to tackle a problem that isn’t often discussed amidst the celebrations of marriage equality: the fact that same-sex couples encounter significant barriers in securing divorces if they move to states that do not recognizes their unions.

Indeed, while the Supreme Court’s recent decision in Windsor v. U.S. requires the federal government to recognize all marriages legally entered in the states, it did not require states to recognize the marriages of sister states. As a result, most of the 33 states that ban same-sex marriage by constitutional amendment or statute also prohibit same-sex couples from divorcing in their courts.

Courts across the country are currently hearing challenges to laws preventing same-sex couples from divorcing (most notably, the Supreme Court of Texas is set to decide In the Matter of the Marriage of J.B. and H.B. this Spring). But while the Full Faith and Credit Clause of the U.S. Constitution would seemingly prohibit states from discriminating against marriages legally entered into by sister states, that legal fight will take years to fully play out in the courts.

For now, the only option for same-sex couples who live in these states is to return to Massachusetts, New York, or another state that recognizes their marriage and maintain residency in their chosen state for between 3 months and 2 years (varies by state) to secure personal jurisdiction to seek a divorce.

In recognition of this problem, a number of states have passed laws allowing courts to grant jurisdiction, under certain circumstances, over divorce/dissolution proceedings for non-resident same-sex couples who have entered into a marriage, civil union, or registered domestic partnership in that state, including California, Colorado, Delaware, Illinois, Minnesota, Oregon, Vermont, and Washington D.C.

Colorado—which still does not permit same-sex marriage—applies similar exceptions for civil unions, as does Oregon for domestic partnerships.

These jurisdiction exceptions are clearly a stopgap measure on the road to a national decree on marriage equality (a ruling that I predict will come in the October 2015 Term at the Supreme Court). Not only that, but the exceptions are limited in their effect since they do not allow orders about other issues like property and debt, partner support, or children.

Nevertheless, despite being a half-measure, it is imperative that states like Massachusetts and New York pass these exceptions this legislative session. It’s a simple fix to a problem that affects thousands of families across the country.

Equal access to divorce may not generate the same excitement as marriage, but it is a civil right all its own and one that must be protected just as vigorously if we are to achieve equal justice under law.
Posted by Andrew L. Kalloch at 4:00 PM