Today’s lead editorial in the New York Times focuses on NYC's ongoing affordable housing crisis. New York City has endured a “housing emergency” (now defined in state law as a vacancy rate under 5 percent) since World War II. The “emergency” has led to the creation and perpetuation of a regulated housing market where over 60 percent of NYC units are either rent-controlled (< 2 percent), rent-stabilized (~48 percent), or part of New York City Housing Authority “public housing.” (full disclosure: I live in a rent-stabilized apartment).

I’ll discuss NYC's housing crisis from many angles in this space, but today I want to focus on one of the prime contributors to the lack of affordable housing in the five boroughs: New York City's backward property tax and what continued inaction on property tax reform says about the state of politics in America.

"One big hurdle to more development is the state property tax on rental property, which discourages housing development by saddling the city’s rental buildings with some of the highest tax burdens in the nation."

While novels have been written about what Crain’s New York called the “Alice in Wonderland” world of the NYC property tax, suffice to say that there are two significant flaws:

1. Disparate treatment of rental property (categorized in “Class 2” of NYC’s 4-class scheme) and owner-occupied properties (whether 1-3 family homes (“Class 1”) or co-ops and condos, which are in Class 2 but are the beneficiaries of a longstanding “abatement” that brings their effective tax rate (“ETR”) close to that of Class 1. 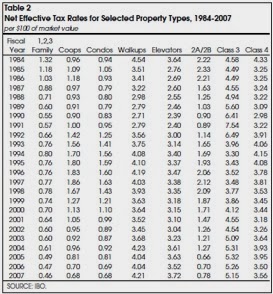 As data from the New York City’s Independent Budget Office shows (see chart, left), by FY 2007, rental buildings were paying an effective rate 5.5 times that of co-ops and condos and close to 8 times that of 1-3 family homes.

2. A property assessment system that woefully underestimates the value of luxury housing.

State law requires New York City’s co-ops and condos to be valued by income rather than sales price. As a result, instead of using sales prices of apartments in a building to determine market value, the City selects “comparable” rental buildings as to assess the values of co-ops and condos. These “comparables” often include rent-regulated units, even if the co-op or condo building in question includes no rent-regulated units at all.

As a result of this assessment system, the Furman Center at NYU recently identified 50 individual co-ops were sold for a higher price than the Department of Finance assessed market value FOR THE ENTIRE BUILDING.

If the property system is so backward—simultaneously stacked against the majority of New Yorkers (renters) and in favor of owners of the most valuable residential real estate in the City—why hasn’t anyone done anything about it?

The common refrain is that property taxes are the “Third Rail” of NYC politics. This phrase—which infects debates on everything from Social Security and the Pentagon Budget to small town issues like streetlights and noise ordinances—is a devastating commentary on the state of our politics and the lack of trust between our leaders and the people they govern.

Indeed, the idea of the “Third Rail” has become so ubiquitous that practically any policy that has even short-term negative effects on some individuals is considered toxic. Instead, we all too often talk a big game about how nothing is more important than our children, only to turn around and reject sacrifices necessary to protect the planet (carbon taxes, a rational toll system, parking reform) or safeguard our future fiscal health (tax reform and streamlined services).

What is so desperately needed in American politics today are leaders willing to seize upon the “Third Rails” and trust the public not to flip the proverbial switch; leaders who treat voters as adults who grapple with difficult decisions every day and must understand that government faces similarly-challenging choices; leaders who are motivated to tackle the grand problems of our time, “not because they are easy, but because they are hard.”
Posted by Andrew L. Kalloch at 11:55 AM