Comcast, General Electric, and The Role of Government in America

“The winners…will be those who…insist on being number one or number two in every business they are in. Don’t play with businesses that can’t win. Businesses that are number three, number five in their market—Christ couldn’t fix those businesses. They’re going to lose anyway.”

Last week, Comcast announced its intention to buy Time Warner Cable in a $45.2 billion deal that will unite the nation’s two largest cable providers. According to the New York Times, the resulting company will operate in 43 of the 50 largest metropolitan markets, and will serve nearly 30 percent of paid television subscribers and about one-third of all broadband Internet subscribers.

Outcry about the anticompetitive effects of the merger has been strong—not only from consumer groups, but from politicians on both sides of the aisle—an unsurprising result given that Americans pay more for worse service than most countries in the developed world.

Many cities—from Lafayette, Louisiana to Chattanooga, Tennessee—have have launched municipal fiber networks in an effort to thwart the monopolistic behavior of the telecommunications industry.

As Susan Crawford, visiting professor at Harvard Law School [my alma mater] and author of “Captive Audience: The Telecom Industry and Monopoly Power in the New Gilded Age,” wrote in the Boston Globe this week:

The way to do this is to install a new wholesale fiber network controlled by the city…Cities do not have to be in the business of competing with private providers, but their control of the basic infrastructure is essential to make sure that competition emerges.

We’ll talk more about the nation’s connectivity problems in another post, but today, I want to use the struggle to find a solution for sluggish Internet to examine how we should outline the scope of government in the 21st century.

For guidance, let’s go back 30 years to one of the seminal philosophies in American corporate history: Jack Welch’s effort to streamline General Electric into a capitalist juggernaut.

Welch—a native of Peabody, Mass. who grew up in Salem and later graduated from the University of Massachusetts—famously scribbled his philosophy on a napkin during an interview with Forbes Magazine in 1984 (see picture, left). 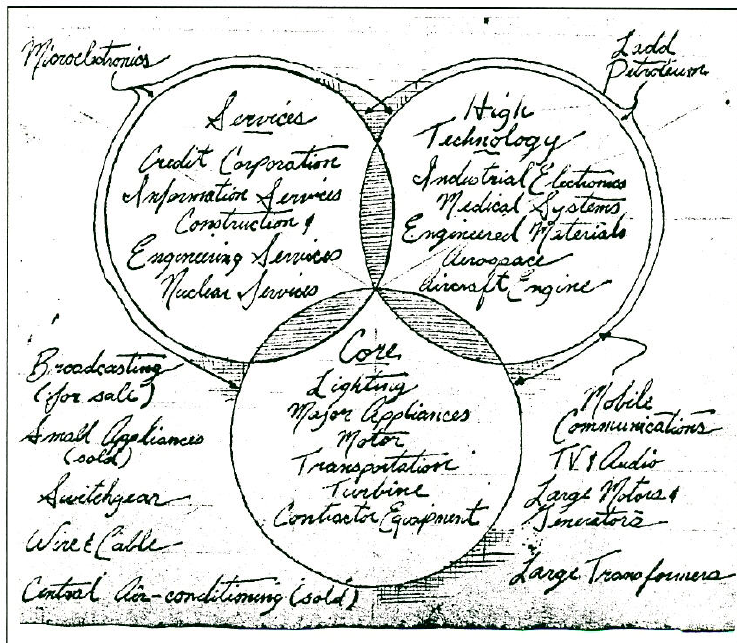 The picture shows GE’s three “core” businesses, from Welch’s perspective, as well as other non-core businesses that were either number one or number two in their respective fields. For businesses that failed to fall into one of those two buckets, the solution was brutal and short, "Anything outside the circles we will fix, close, or sell," Welch said.

This philosophy was anything but charitable. In his first five years as CEO (1981-1986), Welch slashed 130,000 jobs – 1 of every 4 workers at GE. However, those who remained were the beneficiaries of a more directed, stable, profitable company, which grew shareholder (and worker) value.

Welch’s leadership of one of America’s flagship companies provides meaningful guidance on how we should go about determining the size and scope of government in America, his misguided statements about the growing chasm between executive and worker pay notwithstanding.

Government, unlike private business, does not always have a legion of natural competitors (national defense, for instance). However, government does compete with the private sector in a variety of ways (public universities and the Postal Service just to name a few). I believe that defining the role of government starts by examining what you want government to do and placing it into one of the four boxes of the two by two matrix below: 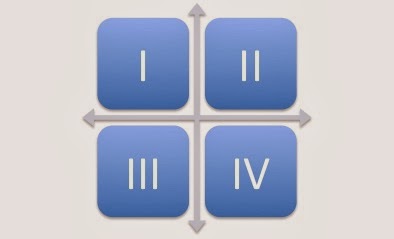 Like Welch’s three circles, we should examine everything that government does through this matrix to determine where to “fix,” where to “close,” and where to “double down.”

Let’s start with the easy stuff in boxes II and III.

We should be doubling down on government investment in functions falling into box II, not only because government excels, but also because there is no logical alternative. Many of these functions are so-called “natural monopolies” such as water and national defense (though there is admittedly some question as to whether government does well in these categories—more on that later).

We should completely eliminate functions in box III, where government is a woeful failure and private industry does fairly well. Venture capital (“picking winners and losers”) is perhaps the most obvious example of this, though others surely exist.

Now things get tricky. What do we do with box I? I believe that we should neither buy or sell, but “hold” our investments in these areas and take advantage of the private sector mechanism where feasible. For instance, few government investments are as beneficial as higher education and research and development. However, private universities (here’s looking at you, MIT) are incredibly successful at putting these dollars to work. Thus, government should continue to provide public higher education (particularly to provide low-cost alternatives to students of lesser means), while also pumping billions of dollars into R&D at America’s private colleges and universities.

Lastly, we come upon the bane of our existence: box IV. The first question to ask is whether the function need occur at all. Assuming that the answer is yes—and that someone has to do it—government has no choice but to fill the gap. However, given government’s terrible track record, legislators must be even more willing than usual to (a) experiment with innovative approaches to service delivery and (b) exercise unusually probing oversight.

A good example of this is the operation of commuter railroads. In Massachusetts, both the government (MBTA) and private enterprise (MBCR) have proven ineffective at keeping the trains on time and on budget. Thus even though optimism abounds that a new private carrier, Keolis, will succeed where others have failed, legislators should be on the lookout for waste, fraud, and failure.

In the end, like Welch’s circles, the matrix I’ve outlined won’t hold all functions demanded of government or the private sector. However, it is an effort to get at one of the first principles of American democracy: how to determine the shape and scope of our government.
Posted by Andrew L. Kalloch at 4:00 PM