On the Move: Opportunity and Mobility in America

“This perennial rebirth, this fluidity of American life, this expansion westward with its new opportunities, its continuous touch with the simplicity of primitive society, furnish the forces dominating American character.”

--Frederick Jackson Turner, “The Significance of the Frontier in American History,” 1893

This week, the Census Bureau released a new data tool showing county-by-county migration data in the U.S. between 2007-2011 (see: http://flowsmapper.geo.census.gov/flowsmapper/map.html).

As the Great Recession took hold, domestic migration plunged, reaching the lowest level since the government began tracking it in the 1940s (see chart). 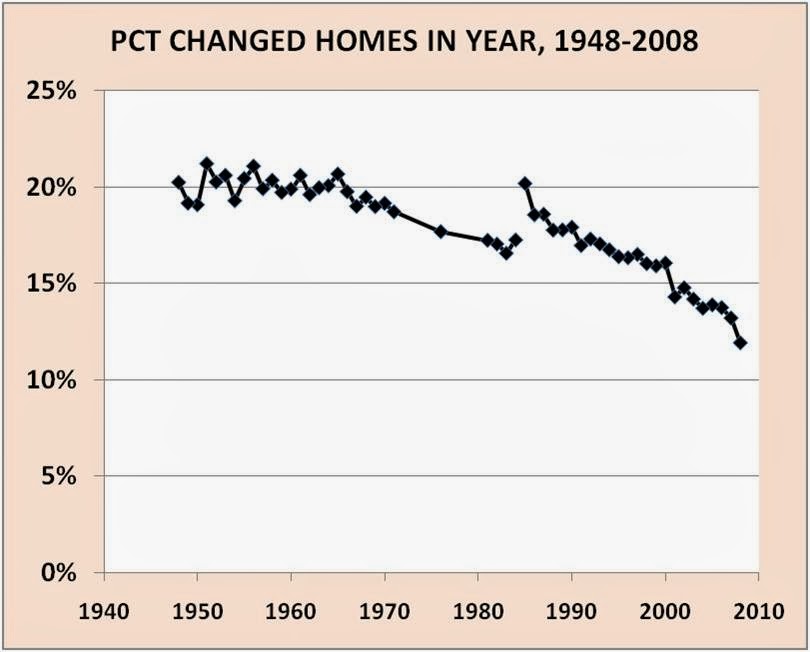 However, as the economy emerged from recession (and household formation of Millennials followed), migration has seen a slight bump. Today, in a given year, roughly six percent of the population aged 1 and older move across county lines or from abroad.

As we are apt to do in this space, let’s take a closer look at some of the more interesting findings from New York City and the Commonwealth and one unique idea from the Hamilton Project at the Brookings Institution to boost opportunity for low-income Americans.

While story of Brooklyn’s boom over the past decade is well known, the data indicate that within New York City, the Bronx is the borough with the greatest positive net migration. Brooklyn was a net loser of population to every borough other than Manhattan, while the Bronx gained immensely from the other boroughs, including over 9200 people from Manhattan.

Notably, a second level analysis of who these individuals are suggests that the net migration of the Bronx is fueled by low-income and low-education households (the Bronx is the poorest urban county in America, with nearly 30 percent of residents living below the poverty line)—perhaps as the result of those families being pushed out of other boroughs by rising rent and/or the growth of low-wage jobs in the Bronx.

Nevertheless, the population resurgence in the Bronx is cause for optimism. As the Times reported, while the total net migration to the Bronx remains minimal, the borough suffered from annual losses neared 20,000 as recently as twenty years ago.

In the Commonwealth, the story to note is the continued resonance of the Route 128 corridor and the strength of the Metro-Boston region’s higher education institutions in driving highly educated workers to the Bay State. Middlesex County in particular—home to Harvard and MIT, among others—is among a handful of areas (Los Angeles, Manhattan, D.C. and Chicago) that “trade” these highly skilled workers back and forth.

In addition, Suffolk County (Boston) has seen a surge in individuals with graduate level education. In fact, for every 100 residents in the county with this level of education, 9.8 of them moved into the county during the previous year ─ among the highest rates of any large county in the nation (many graduate-level degree holders also leave Boston every year, but that is largely the result of having completed their education at BC, BU, Northeastern, etc.).

Some have expressed concerns about the long-term decline in residential mobility—that it perpetuates racial segregation, is indicative of a lack of frontier spirit that drives entrepreneurial economies, or is an unintended byproduct of post-war efforts at increasing homeownership in America.

There are no doubt circumstances in which one or more of these concerns are valid. However, the lack of residential mobility may also be a product of a long-term trend toward more latticed social networks outside the nuclear family (and the desire not to leave them behind). It could be the product of an increasingly urbanized America that is less susceptible to the types of natural shocks—like the Dust Bowl—that drove thousands from the Plains to the West Coast. Or it could be that Frederick Jackson Turner was right—albeit 50 years too soon—that once the West Coast was built up after World War II, there was simply no where else to go.

Enabling Americans to live the lives they imagine—to pursue happiness in the way that they see fit—is one of government’s fundamental promises. However, that doesn’t mean that Americans in the 21st century will want to mimic the migration patterns of those in the 19th.

While academics can and should continue to study these trends and their underlying causes, policymakers need not be concerned about absolute rates of residential mobility. Rather, the “First Principle” is always to define the problem—are people who want to move unable to do so, and why? Are these parts of the country that are in a vicious cycle of out-migration and economic decline (the answer to which is almost always yes)?

Ensuring opportunity, rather than stimulating mobility for mobility’s sake, should be our lodestar. That’s why Jens Ludwig and Steven Raphael’s idea for a ”Mobility Bank” is worth further study. The Mobility Bank would be a federally funded program to help low-income U.S. workers move to take advantage of job opportunities and to ensure that while Frederick Jackson Turner’s frontier may have closed, the frontier of a new and better life is still at the heart of the American Experience.
Posted by Andrew L. Kalloch at 12:37 PM