“Properly integrated, they may be looked upon as a three-legged stool affording solid and well-rounded protection for the citizen.”

Last year, the National Institute for Retirement Savings released a report showing that the average working household has virtually no retirement savings. In fact, as shown in the chart below, NIRS found that the median retirement account balance is $3,000 for all working-age households and $12,000 for near-retirement households. 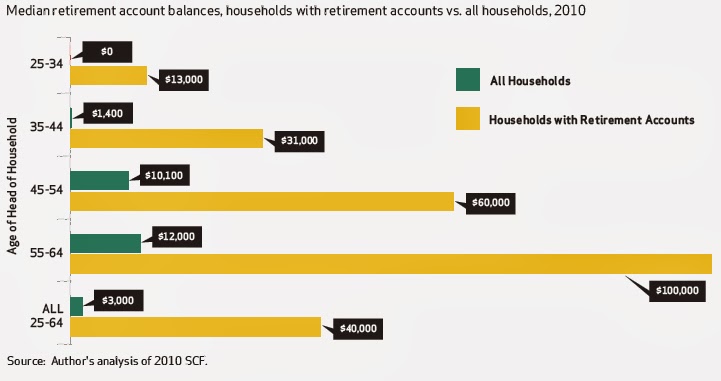 There are many reasons why this crisis has come to past, but one of them has been the steady erosion of the “third leg” of the American retirement stool: the defined-benefit pension. In 1975, there were 2.4 participants in defined benefit pension plans for every one participant in a defined contribution plan (Department of Labor, 2007). However, by 2011, Treasury Department data showed that out of $11.2 trillion of private pension assets, only 21 percent were maintained in defined benefit plans, with the remainder held in defined contribution plans (36 percent) and IRAs (43 percent).

However, the decline in DB pensions—while of great concern to many on the political Left—is not the only contributor to America’s retirement problem. A major reason for the lack of savings is the fact that many American families do not earn sufficient wages in the first place to set aside money for retirement, particularly with stagnant wage growth over the last 20 years.

Furthermore, our tax code also does working-class Americans few favors. Let’s take a closer look at the code and what can be done to boost security for working class Americans.

Last year, the Center for Budget and Policy Priorities found that nearly 2/3 of the benefits of the retirement tax incentives went to the top 1/5 of U.S. income earners (see chart, left).

Despite noble and consistent efforts by federal, state, and local governments to boost financial literacy and encourage individuals to open retirement accounts, low-income Americans who have retirement accounts continue to be the exception rather than the rule. Indeed, as of 2010, only 1 in 9 Americans in the bottom 1/5 of income had a retirement account, while nearly 8 in 9 at the top 1/5 had such an account.

While far from a panacea for the retirement security crisis, universal savings plans offer an elegant solution. Legislators on both sides of the political spectrum have long embraced these plans.

In 2006, Senators Rick Santorum (R-PA), Jon Corzine (D-NJ), Chuck Schumer (D-NY), and Jim DeMint (R-SC) proposed the ASPIRE Act, which would have would have automatically opened a KIDS Account for every child assigned a Social Security number. The account would be funded with a one-time $500 contribution, and children in households earning below national median income would be eligible for up to an additional $500.

In a similar vein, Senator Jeff Sessions (R-AL) proposed PLUS Accounts that would be automatically opened for citizens born after 12/31/07 and funded with a one-time $1,000 contribution. The PLUS program would have later expanded to all U.S. citizens under the age of 65 and included mandatory, pre-tax contributions of 1% of each worker’s income (the worker could choose to contribute up to 10%). Under the Session plan, employers would also be required to contribute at least 1% (and up to 10%) of earnings.

While the Tea Party has made such automatic savings/retirement accounts anathema to many in the GOP, these universal, automatic plans continue to be one of our best hopes for helping boost retirement savings for all Americans—particularly those at the bottom end of the income scale. Indeed, according to the Brookings Institution, these types of automatic savings systems “have proven remarkably effective in raising 401(k) participation rates,” particularly for populations that are traditionally vulnerable to retirement insecurity, including women, Hispanics, and low-income Americans (see chart, below). 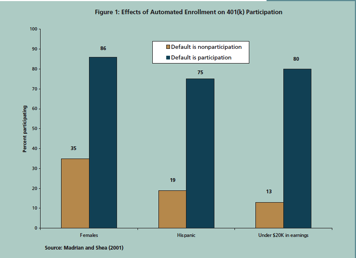 In addition, Congress must make the “Saver’s Credit” refundable to encourage additional savings by lower-income families. The credit provides a tax credit of up to $1,000 (up to $2,000 if filing jointly) on eligible contributions to a qualified retirement plan, an eligible deferred compensation plan, or an IRA. However, because it is non-refundable, it provides no incentive for nearly 50 million households that have no income tax liability.

Lastly, we need to change our eligibility rules for public benefits so that low-income Americans should not be needlessly penalized for making smart decisions to plan for retirement. For instance, in New York, the asset cap for Temporary Assistance for Needy Families (TANF) does not exclude retirement savings.

By creating new carrots to nudge low-income families to save when possible and eliminating needlessly cruel sticks that penalize these families for prudent financial planning, we can work to build new legs of a retirement stool for the 21st century.
Posted by Andrew L. Kalloch at 4:00 PM