The Past, Present, and Future of Heating New England's Homes

“Natural gas, if extracted safely, it’s the bridge fuel that can power our economy with less of the carbon pollution that causes climate change.”

In 2011, the average American household using heating oil spent $2,298, compared with $724 spent by gas users and $957 spent by electricity users. Indeed, the price of heating oil has soared since the end of the Great Recession, continuing a long-term trend that has seen the peak price in Massachusetts rise 200 percent since 2000 (see chart, below). 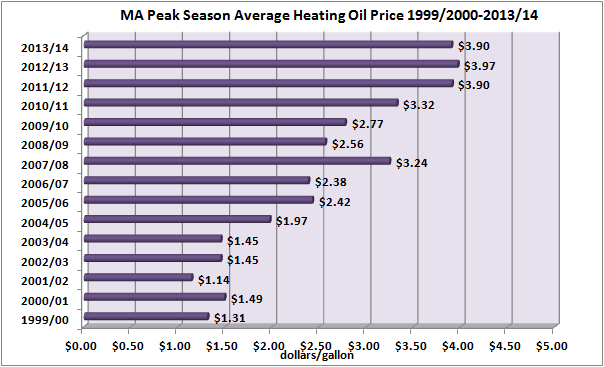 The significant increase in cost is particularly troubling given ongoing cuts to the Federal Low Income Home Energy Assistance Program.

Nationwide, many households have responded to these soaring costs by taking advantage of both a boom in domestic natural gas production and federal subsidies for natural gas development, driving the percentage of homes that use heating oil from about 20 percent in 1975 to roughly 7 percent in 2012.

New England, however, remains a significant outlier in the home heating market. The latest data from the U.S. Energy Administration shows that more than 7 in 10 Maine households use fuel oil as their primary energy source for home heating—a higher share than in any other state—and in Massachusetts, one in three homes is heated primarily with oil.

One of the reasons for New England’s disproportionate use of oil is the lack of natural gas infrastructure—both production and pipeline capacity. As the Energy Department stated last week, “Since 2012, limited supply from…liquefied natural gas (LNG) terminals coupled with congestion on the Tennessee and Algonquin pipelines has led to winter natural gas price spikes in New England.”

A flashpoint in this drama is the proposed $800 million natural gas retrofitting of the Salem power plant. Last week, the latest protest against the proposed plant took place, led by leaders from the Massachusetts chapter of the environmental group 350.org, which views the construction of new natural gas facilities as a significant threat to global climate.

350’s Chairman and co-founder, Bill McKibben, has described America’s reliance on natural gas as “at best a kind of fad diet, where a dangerously overweight patient loses a few pounds and then their weight stabilizes; instead, we need at this point a crash diet.”

While the environmental benefits of natural gas relative to oil are undeniable (natural gas produces about 30 percent less carbon dioxide per Btu than conventional or ultra low sulfur heating oil, according to a 2009 study by Brookhaven National Laboratory), it is also clear that simply replacing oil and coal with natural gas for home heating and electricity production will not be enough to avoid potentially catastrophic climate change (not to mention the very real concerns of communities surrounding hydraulic fracturing).

Furthermore, as the Energy Department concluded, the capital intensive investments necessary to meaningfully expand New England’s pipeline network may not be financially viable, since additional capacity may only be necessary for short periods during the year.

Nevertheless, just as we must not bestow upon our children a despoiled planet, so we must not ignore the very real suffering of so many families in New England and beyond as a result of soaring heating oil costs.

In addition to dedicating resources at the State level to make up for draconian cuts to home heating assistance (perhaps via a temporary increase the share of Regional Greenhouse Gas Initiative proceeds dedicated to direct assistance), we must promote a truly progressive energy policy—one that draws on Massachusetts’ history of clean energy and the strength of our universities.

Cities and towns throughout the Commonwealth have historically relied on clean energy. For over 150 years, Lawrence has embraced hydroelectric power—from the Great Stone Dam in 1848 to the launch of a hydroelectric plant powering 7000 homes a year, in 1981. In Beverly, Salem, and Marblehead, windmills were grinding corn and bark as early as the 17th and 18th centuries.

In more recent years, the Bay State has continued to propel the clean energy economy. In 1979, the nation’s first modern wind turbine manufacturing company was founded in Burlington and in 2011, UMass and the Maritime Academy worked together on a trial of hydrokinetic energy—using the ancient tides of Buzzards Bay to power iPhones.

With an immense coastline, a regulatory environment supportive of renewables, and countless students committed to investing their futures in the field, Massachusetts is the perfect laboratory for the transformative energy technology of tomorrow.
Posted by Andrew L. Kalloch at 5:30 PM