As the first great snow melt of winter hits NYC, let's look ahead to the big Spring Thaw and what comes with it: combined sewer overflows (CSO).  CSOs are one of the City's most pressing environmental problems. Every year, 27 billion gallons of untreated sewage (that’s 41,000 Olympic-size swimming pools for those watching Sochi) is diverted into New York City’s waterways—from Flushing Bay and Newtown Creek to the Hudson River and New York Harbor. 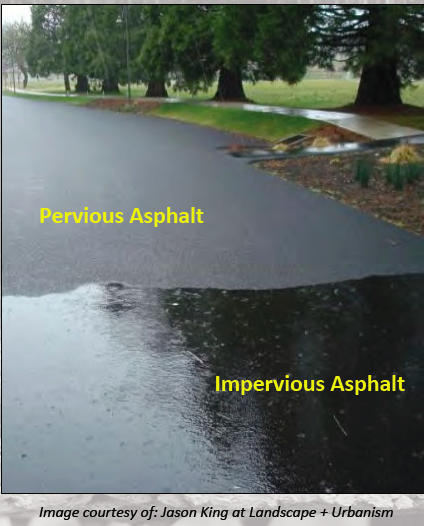 CSOs occur when the City’s sewer system is overwhelmed by rainwater/snow melt—which unfortunately, doesn’t take much. Indeed, as little as a tenth of an inch of rain can render most of the waterfront and its beaches unsafe for recreation.

Today, I want to look at what New York City is doing to address the problem, focusing on permeable pavement, and offer an additional policy initiative that should supplement the City’s plans.

Permeable pavement is an evolving technology that allows storm water to soak through the surface and be captured in underground reservoirs that feed back into the soil (see photo at left).

The New York State Environmental Facilities Corporation recently awarded a $1.2 million grant to NYC Department of Transportation for a pilot of permeable pavement in College Point, Queens. The project is set to be installed in April and will include three types of permeable pavement, which will be compared to standard asphalt for their relative benefits.

If the pilot proves successful, the City will move ahead with implementing 80 sites by 2020 and 400-800 by 2030, in accordance with PlaNYC, which also includes the installation of inflatable dams in Red Hook and Williamsburg, bioswales, and other “green” infrastructure. 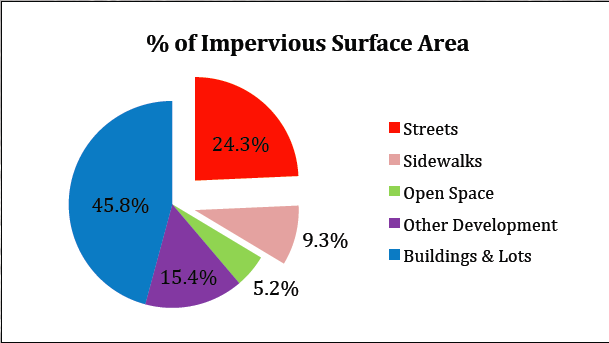 New York is a clear leader among American cities in addressing CSO’s, but I think New York City needs go beyond what is currently planned as part of the PlaNYC effort to address the significant percentage of non-permeable surfaces that exist on private property. As shown in the chart at right, while one-third of the City’s impervious surface area are publicly-controlled streets and sidewalks, nearly half the area is buildings, most of which are privately owned.

To that end, I want to plug an idea developed by a colleague of mine at the NYC Comptroller’s office, Dr. Stephen Corson. Steve’s idea is for the City to develop a series of incentives to nudge private property owners to install new permeable surfaces on residential or commercial lots. This could have a transformational effect on the City’s CSOs, helping to divert billions of gallons of runoff from our waterways.

Sustainable Yards NYC, with assistance from the City of New York’s Institute for Sustainable Cities, found that NYC has 52,236 acres (304 sq miles) of residential yard space—more than a quarter of New York City’s total land area.  Many of these yard spaces are located between row houses, away from street views.

Heretofore, there has been no effort undertaken to measure how much of this space (or other surface areas) is paved and how much is permeable. However, a study conducted by Sustainable Yards NYC and CUNY on one UWS residential block provides a preview of what such a survey might find.

Only 35 percent of the residential yard space measured on the one block (containing 44 rowhouses, 5 apartment buildings and 7 flats) was found to be permeable.  Nevertheless, even that modest amount of permeable space was estimated to have diverted over 50,000 gallons of rainwater from the sewer system in 2009 (in addition to trapping 8822 pounds of carbon dioxide that would have otherwise been released into the atmosphere).

Step one in this effort would be for the City to commission a study that will identify all privately owned non-permeable surfaces areas in the five boroughs. Following that study, the City should work with the State to develop tax-incentive programs to use carrots and sticks to nudge private property owners to do their part to reduce CSOs and make NYC a model for other cities to follow.
Posted by Andrew L. Kalloch at 4:00 PM