Goldilocks: Flexibility in Carbon Policy and the Fallacy of the "War on Coal"

“If the language in the regulation is too loose, there could be little environmental impact. And if it is too stringent, it could lead to the shutdown of coal plants before there is enough alternative power to replace them.”

In coming months, the Obama Administration is set to reveal its climate rule for existing power plants (rules for new plants were published last year) under Section 111(d) of the Clean Air Act. These plants account for about 40 percent of the country’s emissions.

Drafting this rule has proven particularly difficult, not only because the challenge posed by climate change is so daunting, but also because a poorly drafted federal regulation could have dramatically different effects across the nation.

However, while the regulation must not be too loose or too stringent, there is a Goldilocks scenario rooted in Section 111(d), which provides flexibility for states to develop plans that comport with their economic needs and current energy production. Indeed, by taking a mass emissions approach to carbon emission reduction rather than a more targeted “rate-based” approach, the Federal Government will unlock the “states as laboratories” theory that has proven so successful in other aspects of American life.

Importantly, flexibility of method need not (and should not) mean weakening of the underlying goal. As the Commonwealth of Kentucky wrote in a letter to Environmental Protection Agency Administrator Gina McCarthy in October, “Since President Obama’s goal is to reduce carbon dioxide emissions, and not simply favor one fossil fuel over another, compliance options that take into account demand and supply-side energy efficiency and renewable and other low-carbon generation sources must be allowed.”

Kentucky is a particularly interesting test case. Today, 92 percent of Kentucky’s power is generated from coal. For decades, this has meant low energy costs in Kentucky, leading its economy to become heavily dependent on manufacturing. As a result, as shown in the table, Kentucky’s “energy density” (the amount of energy it uses per Real GDP) is the highest in the nation. 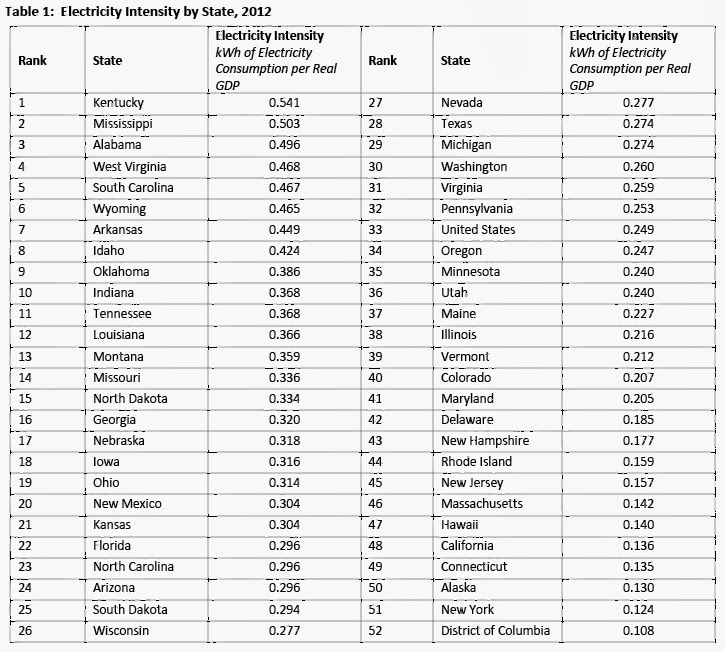 An inflexible carbon emissions standard could potentially shutter Kentucky’s coal plants overnight, not only devastating the Bluegrass State’s economy and imposing considerable pain on working class families, but also leading to an abrupt turn toward natural gas electrical generation, rather than a slower, but more ambitious development of truly clean, renewable energy.

The much-discussed “War on Coal” (an political allegation created by climate change deniers in an effort to thwart any carbon legislation or regulation) does not, standing alone, accomplish the goals we have set forth as a nation vis-à-vis carbon emissions and climate change policy. Rather, the goal of carbon policy must not be to “pick winners and losers”—a task that the government is woefully incapable of performing—but to set ambitious standards and hold states accountable with carrots and sticks.

That’s why we should be encouraged by recent statements by EPA Administrator McCarthy, who told the National Association of State Energy Officials that the EPA would not be “imposing solutions” but would instead “open[] up opportunities” for states to experiment with different ways to reduce emissions.

In the end, even the Goldilocks scenario is unlikely to satisfy many Congressional Republicans, especially those from coal country who face primary challenges from the right (I’m looking at you, Senator Mitch McConnell). For them, the proverbial porridge will go uneaten.

But the rest of us understand that the decisions we make today and the courage to experiment with different approaches will preserve the planet for Goldilocks and the Three Bears for generations to come.