Bowling Together: "Being Somebody" in Modern America

“The growing good of the world is partly dependent on unhistoric acts; and that things are not so ill with you and me as they might have been, is half owing to the number who lived faithfully a hidden life, and rest in unvisited tombs.”

On August 14, 1851, Rev. Horace Bushnell of Hartford, Connecticut, delivered a speech titled The Age of Homespun, in which he mocked the effort of historians to catalog famous dates and persons and insisted that the truly valuable acts of our world are those performed by the “average” citizen.

[In] our historic pictures, we are obligated to sink particulars in generals, and so to gather, under the name of a prominent few, what is really done by nameless multitudes. These, we say, led out the colonies, these raised up the states and communities, these fought the battles. And so we make a vicious inversion, not seldom, of the truth; representing as causes those who, after all, are not so much causes as effects, not so much powers as instruments, in the occasions signalized by their names—caps only of foam, that roll conspicuous in the sun, lifted, still, by the deep under-swell of waters hid from the eye.

Bushnell’s simple conclusion: “True worth is for the most part unhistoric.”

I thought about Bushnell’s thesis as I unforgivingly traversed the dusty clay streets of Easter Island with my then-67-year-old mother in May 2012. Perhaps to ward off utter exhaustion or to refrain from saying what she really felt about my insistence that we walk every last inch of one of the world’s most mysterious and secluded locations, Mom took the opportunity to talk at length about her childhood, our family, and what she dreamt of as a child growing up in the small Berkshire village of Lee, Mass.

One of the most striking things that Mom said, with a tone of considered disappointment, was that she “always through she’d be somebody.” This struck me as an odd statement, and a troubling one. Mom was (and is) so many things to so many people. Within our family alone, Mom is the third child of a civil servant father and a homemaker mother, a sister to three brothers and sisters, a mother to two (and a surrogate for more), not to mention an ever-patient and forgiving spouse (right, Dad?) for 40+ years.

Beyond the familial, Mom’s life has been equally infused with meaning. She won multiple national teaching awards during her 35-year career as an educator (mainly at Swampscott, Mass. public schools). She’s been treasurer of our local library, a deacon at the First Church of Wenham Congregational, and an ever-present volunteer at Appleton Farms in my hometown of Hamilton, Mass (just to name a few of her many activities).

And of course, neither of my parents can travel the North Shore without bumping into old students who remember Ms. Airoldi (later Mrs. Kalloch) and Mr. Kalloch fondly as critical players in their emotional and intellectual development.

So how could it be that my mother didn’t think she was somebody?

In 1995, Robert Putnam, Professor of Public Policy at Harvard’s John F. Kennedy School of Government, wrote an article in the Journal of Democracy titled, “Bowling Alone: America's Declining Social Capital.” The article, which Putnam eventually turned into a book in 2000, was centered on the idea that the “vibrancy of American civil society” (what Putnam terms “social capital”) had notably declined in the second half of the 20th century and that such a deterioration was having a multitude of unintended and unhealthy consequences on the state of the American republic.

Putnam continues to be one of several thinkers whose work has had a profound effect on the way I approach politics—so expect to see more of him in “First Principles” posts in the months to come. For the purpose of this post, Putnam’s observation is critical to understanding the answer to the question posed above.

Simply put, I think my mother’s conclusion is a product of how our society has slowly but surely chipped away at viewing community connections and social linkage as critical elements of a life well lived.
Everyone plays a role in how a society functions. Everyone is somebody to someone—and often many things to many people, all at the same time. And everyone needs to value each other’s contributions to our collective effort as citizens to make a freer, more just world for our neighbors, whether down the block, across the country, or around the world. 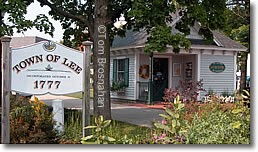 I’ll end—if you will indulge me—with one more familial vignette. Like my own mother, my mother’s mother, Mildred Anson Airoldi, played a variety of roles in her community. One role was as a volunteer at the local information booth on the Lee Town Green (see photo), which still stands at the corner of Main Street and Park Street.

Like many Berkshire towns—from Stockbridge and Great Barrington in the south to Williamstown and Adams to the north—Lee has long relied on tourism to boost its economy, especially as manufacturing fled in post-war period. My grandmother would welcome visitors to the Gateway to the Berkshires, whether they came to enjoy a concert at nearby Tanglewood in the summer, our famous foliage in the fall, or snow sports in the winter.

My grandmother was doing her part for her community. She was part of a world in which we “Bowled Together” and which that togetherness was valued. It’s a world that has, in some ways, passed us by. But it is also a world that can inspire us to do better—to appreciate the roles we play in one another’s success and to remember that while the world will long be full of unvisited tombs, it must never forget the people who inhabit said tombs. Those people were somebody.
Posted by Andrew L. Kalloch at 4:00 PM