What We Really Mean When We Seek Consistency in Politics

“A foolish consistency is the hobgoblin of little minds, adored by little statesmen and philosophers and divines.”

In Winston Churchill’s seminal essay, “Consistency in Politics,” the then-Chancellor of the Exchequer wrote at length about the need for consistency in politics—not a blind adherence to a consistent ideology, but rather a more principled consistency of purpose.

A Statesman in contact with the moving current of events and anxious to keep the ship on an even keel and steer a steady course may lean all his weight now on one side and now on the other. His arguments in each case when contrasted can be shown to be not only very different in character, but contradictory in spirit and opposite in direction: yet his object will throughout have remained the same. His resolves, his wishes, his outlook may have been unchanged; his methods may be verbally irreconcilable. We cannot call this inconsistency. In fact it may be claimed to be the truest consistency. The only way a man can remain consistent amid changing circumstances is to change with them while preserving the same dominating purpose.
Indeed, stubborn obedience to a particular belief is not what we should seek out in any politician—which is why the barbs of “flip flopper” are always so inane (see image from the defunct blog www.sacredcowburgers.com). Sure, a politician who changes her mind solely on account of public opinion and not based on a principled examination of the facts at hand leaves much to be desired. 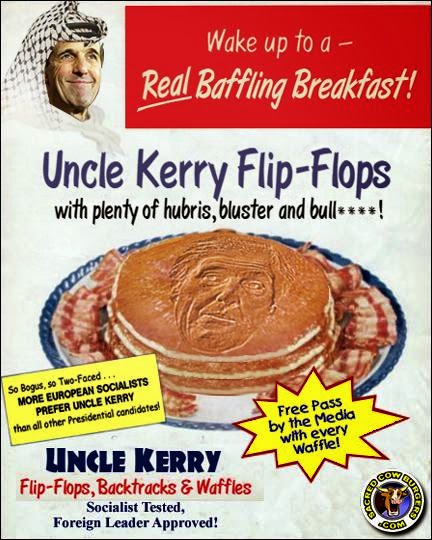 However, the very fact that a leader is able to admit—to herself and the public—that her initial belief was in err is a sign of maturity, confidence, and humility—the very characteristics we should seek out in leaders. That’s the difference between a “foolish consistency”, in Emerson’s words, and an understanding that a consistent search for truth and justice (one of our core “First Principles”) necessarily involves changing one’s views over time.

Nevertheless, during a political campaign, it is important for voters to evaluate how consistent candidates are in their messaging. Voters should be extremely suspicious of a candidate who says one thing to one interest group and another thing to the opposing group in a cynical effort to curry favor with all people on all issues.

That’s why the issue of transparency surrounding candidate questionnaires issued by unions, advocacy organizations, and business groups in the ongoing Massachusetts gubernatorial race is so important. As highlighted by Boston Globe columnist Scot Lehigh, several candidates, including Juliette Kayyem (D) and Charles Baker (R), have agreed to make all of their questionnaires available to the public. Others, including Treasurer Steve Grossman (D), continue to maintain confidentiality of questionnaires when asked to do so by advocacy organizations.

The position of Kayyem and Baker is clearly the right one, as sunlight—that ever-powerful disinfectant—not only provides the public with additional information about where the candidates stand, but also creates a significant incentive for candidates to be consistent in their policy positions. (for a counterargument, see the response to Lehigh’s piece by Steven Tolman, President of the AFL-CIO of Massachusetts).

This is not to say that candidates can or should approach every single voter or group in the same way. To the contrary, just as one of the hallmarks of a great teacher is to prepare a lesson in a number of different ways in order to effectively communicate the idea to a diverse group of students (a lesson I learned first-hand from Mom and Dad), so candidates for public office must understand the peculiarities of the audiences they are addressing and adjust their messaging accordingly.

That doesn’t mean that you give a passionate speech against fossil fuels at the Sierra Club, only to turn around and hail the coal industry at the National Mining Association. Rather, it means that, as a leader of a diverse constituency, you meet people where they are and seek to persuade them in a number of different ways.

In the end, the changing of the mind is not something to run from, but rather something to be embraced as an essential part of the human experience. As voters, we must be equally skeptical of candidates who hold fast to preconceived beliefs at all costs and those who seem all too willing to tell a given constituency exactly what they want to hear. Consistency of character, of motive, of mission—these are the hallmarks of great leadership and the characteristics I will be looking for in the race to become the 72nd Governor of the Commonwealth.
Posted by Andrew L. Kalloch at 8:30 AM