While this interpretation of the right to bear arms was hotly contested, Justice Antonin Scalia, writing for the majority, stressed that the Second Amendment left room for reasonable gun safety regulation. “We are aware of the problem of handgun violence in this country…The Constitution leaves the District of Columbia a variety of tools for combating that problem, including some measures regulating handguns.”

To that end, in the wake of the massacre at Sandy Hook Elementary School in December 2012, Massachusetts legislators commissioned a report on ways to improve the Bay State’s already tough gun laws. That report, from the Committee to Reduce Firearm Violence, was released last month. It includes 44 steps the Commonwealth can take to strengthen gun safety, including enrolling Massachusetts in a national mental health database for screening potential gun buyers, improving firearm training, and strengthening oversight of secondary market transactions.

However, with the exception of floating an idea to offer a tax credit for the purchase of gun safes (Massachusetts law requires safe storage of guns in the home), there is nary little mention of the role technology can play in common sense gun regulation.

In recent years, technology has made our cars, homes, drugs, and heavy equipment safer. And it is high time that we exploit technology to make our guns safer, too.

Truth is that safety technology has been part of the gun industry since the 19th century, when Springfield, Mass.-based Smith & Wesson pioneered the grip safety—a lever that the user would depress in order to make the trigger operable. Think of it as the firearm version of the childproof pillbox. Indeed, as the company’s 1895 marketing manual put it, “One very important feature of this arrangement is the safety of the [fire]arm in the hands of children, as no ordinary child under eight years of age can possibly discharge it.”

Today, smart gun technology is more advanced than ever, with companies using radio frequency identification (RFID) and finger/palmprint technology to create “personalized guns” that can only be fired by authorized users. This innovation promises to save the lives of children who unintentionally get a hold of a poorly-stored weapon as well as law enforcement, who could no longer be harmed if an assailant stole the officer’s service weapon.

And yet, while it would seem that technology designed to reduce the hundreds of unintentional deaths by firearms annually (including many children) would engender consensus among gun control advocates and Second Amendment enthusiasts alike, that is no longer the case, as the National Rifle Association (NRA) has radicalized.

In the aftermath of the Columbine High School shootings in April 1999, the NRA went apoplectic at the mere idea that Smith & Wesson would invest in smart gun technology—stating that the company had raised “the white flag of surrender.”

Just this month, when a California gun store became the first in the nation to market personalized weapons (technology that has been in use abroad for years), backlash from “gun rights” activists was so furious that the store dropped the product.

This fear of government overreach has played out even in deep-blue Massachusetts, where applications for Class A firearm permits (a “license to carry”) are rising in communities throughout Essex and Middlesex counties (including double-digit increases in Billerica, Burlington, Middleton and Rowley).

But common sense gun safety measures can save lives and protect the Second Amendment rights of law-abiding Americans. Supporting promising personalization technology is one way to do just that. Indeed, just as the government and the auto industry invested billions of dollars to transform safety on our highways (see chart from Bloomberg)—from seat-belts and airbags to anti-lock brakes and improved lighting—so the private and public sectors must make similar investments in smart gun tools. 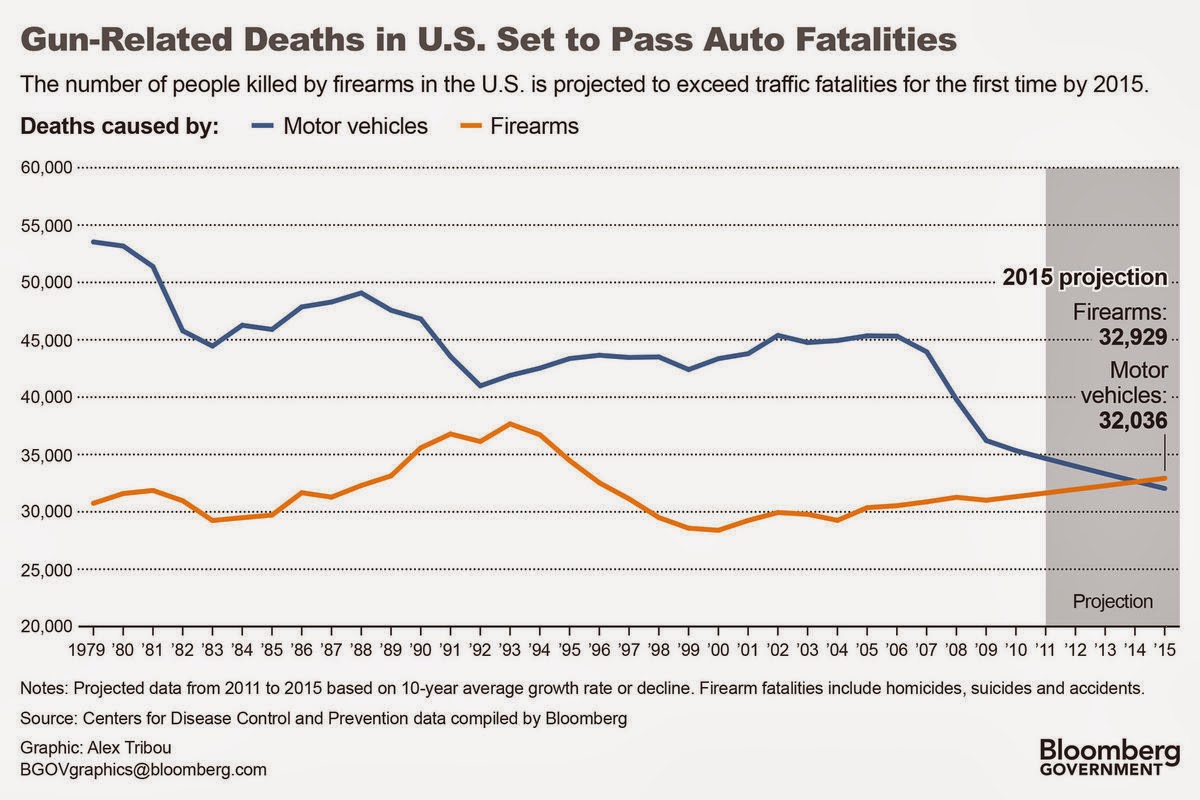 Specifically, government should subsidize business investment in smart gun technology (including through competitive grants/contests, as tech venture capitalist Ron Conway has recently done) as well as offer tax incentives for the consumer purchase of these new devices.
Posted by Andrew L. Kalloch at 4:00 PM