“The fragile, developing self-image of the young person needs all the support and enhancement it can get. Smoking may appear to enhance that self-image in a variety of ways.”

“The use of e-cigarettes does not discourage, and may encourage, conventional cigarette use among U.S. adolescents.” That was the conclusion of a new study published in the Journal of the American Medical Association last week, highlighting the continued challenge facing public health officials in determining appropriate regulation of a booming new market that simultaneously promises a less harmful alternative to conventional cigarettes, but may well be an end-around the anti-tobacco efforts that have driven youth smoking rates down since the 1990s (see chart from the CDC). Indeed, since 1997, smoking among 8th, 10th, and 12th graders in the U.S. has declined by nearly two-thirds. 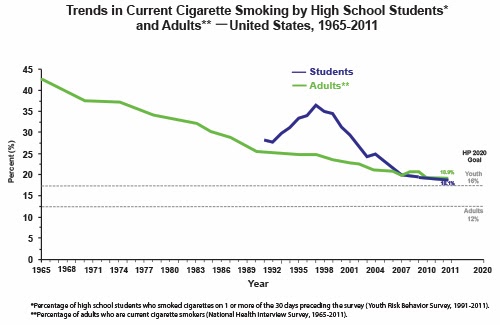 Within the public health community, the conclusions reached in the JAMA study are far from consensus. As Thomas J. Glynn, a researcher at the American Cancer Society, told the New York Times, “The data in this study do not allow many of the broad conclusions that it draws.” Furthermore, the study fond that youth who used e-cigarettes were more likely to plan to quit smoking.

As RJR researchers noted above 40 years ago, “Realistically, if our Company is to survive and prosper, over the long term we must get our share of the youth market…[T]his will require new brands tailored to the youth market.” This statement is as true today as it was then. As the Surgeon General reported earlier this year in a landmark report, 87 percent of smokers use their first cigarette by 18 years of age, with 98 percent starting by age 26.

It comes as no surprise, then, that the tobacco industry views e-cigarettes, like Joe Camel before them, as a gateway to hook youth on nicotine.

According to the CDC, nearly 7 percent of American youth in grades 6 through 12 tried an e-cigarette in 2012, more than double the rate in 2011. This shouldn’t be a surprise, given that e-cigarette marketing is transparently directed toward kids, both in terms of cost (e-cigs cost significantly less on average than conventional packs) and flavoring. Indeed, as USA Today noted, while the FDA banned flavored tobacco cigarettes, there are no such restrictions on cigars or e-cigarettes. This regulatory loophole has led to flavors like Fruit Loops and cookies and cream.

The tobacco industry is once again leaving no stone unturned to get at this potentially lucrative market. In January, a group of tobacco companies sued the City of New York in federal court to halt new regulations slated to go into effect this month. The companies allege that the City’s ban on coupons and otherwise promotionally priced tobacco products are an unconstitutional restriction of free speech (in addition to being preempted by both federal and New York State law).

If you are rolling your eyes at the idea that barring coupons from being used to circumvent national efforts to boost the price of cigarettes in order to (a) pay for a portion of the health costs imposed by the industry’s product and (b) dissuade children from picking up the deadly habit, implicates the First Amendment, you aren’t alone.

Last week, the Campaign for Tobacco Free Kids filed an amicus brief on behalf of the City, highlighting the inverse relationship between cigarette price and cigarette use. In particular, the Campaign noted how Philip Morris’ 1993 “Marlboro Fridays” program (and the corresponding cuts in prices by competitors) led to an immediate and sharp increase in youth tobacco consumption.

So what are public health officials to do while we await better data about the effect of e-cigs? I think they need to do three things, keeping in mind our first principles:

1.     The government should fund independent research into the effects of e-cigarettes on users and others who breathe in supposedly harmless “water vapor”. Until the “vapor” is found to be safe, e-cigarette use should be banned in public accommodations to reduce the chances of second-hand harm.

2.     The government should aggressively restrict marketing of e-cigs to youth and should, in the interim, classify e-cigs as tobacco products (as the FDA has) for the purpose of taxation, all while keeping in mind that tax breaks (and even credits) could be worthwhile if e-cigs are shown to enable smoking cessation (like nicotine gum).

3.     Public health officials should actively market smoking cessation products to young people—with PR campaigns focused near schools, parks, and malls. Whether hooked on conventional cigarettes or the trendy-tech version, all people—but especially our children—deserve a chance to wean themselves from addiction.

Despite a multi-billion dollar settlement in 1998, the tobacco industry has proven resilient in developing new and deadly campaigns to hook young people on nicotine. We are in the opening stanzas of the E-Cig industry and it is incumbent upon us to not exhibit the same naïveté in the face of the tobacco companies as we did for much of the 20th century. If we do, the effects will continue to be measured in billions of dollars and millions of lives.
Posted by Andrew L. Kalloch at 4:00 PM