An Eternal Asset: Making the Most of Essex County’s Waterfront

“She knew they were her woods by the smell of pines and the quality of the air, a scrubbed, cool, clean sensation that she associated with the Merrimack River. She could hear the river, distantly, a gentle, soothing rush of sound that was really in no way like static.”

As the story goes, in 1004, Thorewald the Norseman, a seafaring fellow meandered down the New England coast in search of the perfect dwelling place. Upon laying his eyes on Cape Ann (or, as others assert, Nahant), Thorewald declared, “It is beautiful; and here I would like to fix my dwelling.”

Whether he was steering his vessel around the jagged cliffs of Rockport, the brilliance of Dolliber Cove, or the tiny peninsula of Nahant, the truth is that Thorewald couldn’t go wrong. Indeed, with nearly 500 miles of coastline, not to mention flowing rivers from the Merrimack to the Ipswich, Essex County is a beautiful a place to fix a dwelling as it was a millennia ago.

Twenty years ago, in a profile of Cape Ann for the New York Times, Suzanne Berne wrote that “[w]hile Gloucester maintains a fishing industry and a palpable grittiness, Rockport has cleated its future to galleries and craft shops.”

The tension between a “working waterfront” and the importance of tourism to Essex County’s economy is an important element in how policymakers and communities approach reshaping waterfronts as part of an integrated economic development strategy.

The future of Essex County’s rivers and shores is one of mixed-uses, fighting to protect fisheries and ports, while simultaneously welcoming people to engage with the water in new ways. This model is on display today in Haverhill, where a plan forged through a public-private partnership is in place to reconnect residents with the Merrimack River by literally tearing down a block of buildings that close off the waterfront and rebuilding downtown with office and retail space, apartments, restaurants, a boardwalk, and—most importantly, perhaps—a new satellite campus for UMass-Lowell.

While Haverhill appears ready to pull shovels in the ground this fall, Lynn’s Master Waterfront Plan is now six years old and progress has been frustratingly slow on the 305-acre site which sits a mere 10 miles north of Boston. 2014 may be the year things speed up, though, as ferry service from Lynn to Boston may finally arrive (thanks in no small part to the efforts of State Senator Thomas McGee). Nothing is more important to jumpstart the private-sector investment that is essential to the plan’s success than the creation of transit links like the ferry and the extension of the Blue Line to Central Square.

Despite delays in getting its master plan off the ground, Lynn’s embrace of mixed-use plans along the waterfront, just like that of Haverhill, Gloucester, and communities throughout Essex County, promises to create an “active” street life that promotes business development and reconnects our communities to their historic roots.

Innovative waterfront development must also exploit modern technology and antiquated infrastructure to draw people to the water and teach both tourists and natives alike about the County’s history.

In Gloucester, Mayor Carolyn Kirk has embraced technology as a way to support both critical economic drivers. In 2012, Mayor Kirk launched the Gloucester Harborwalk, 1.2-mile stroll full of stories about Gloucester’s past and present history and fully integrated into a mobile app. 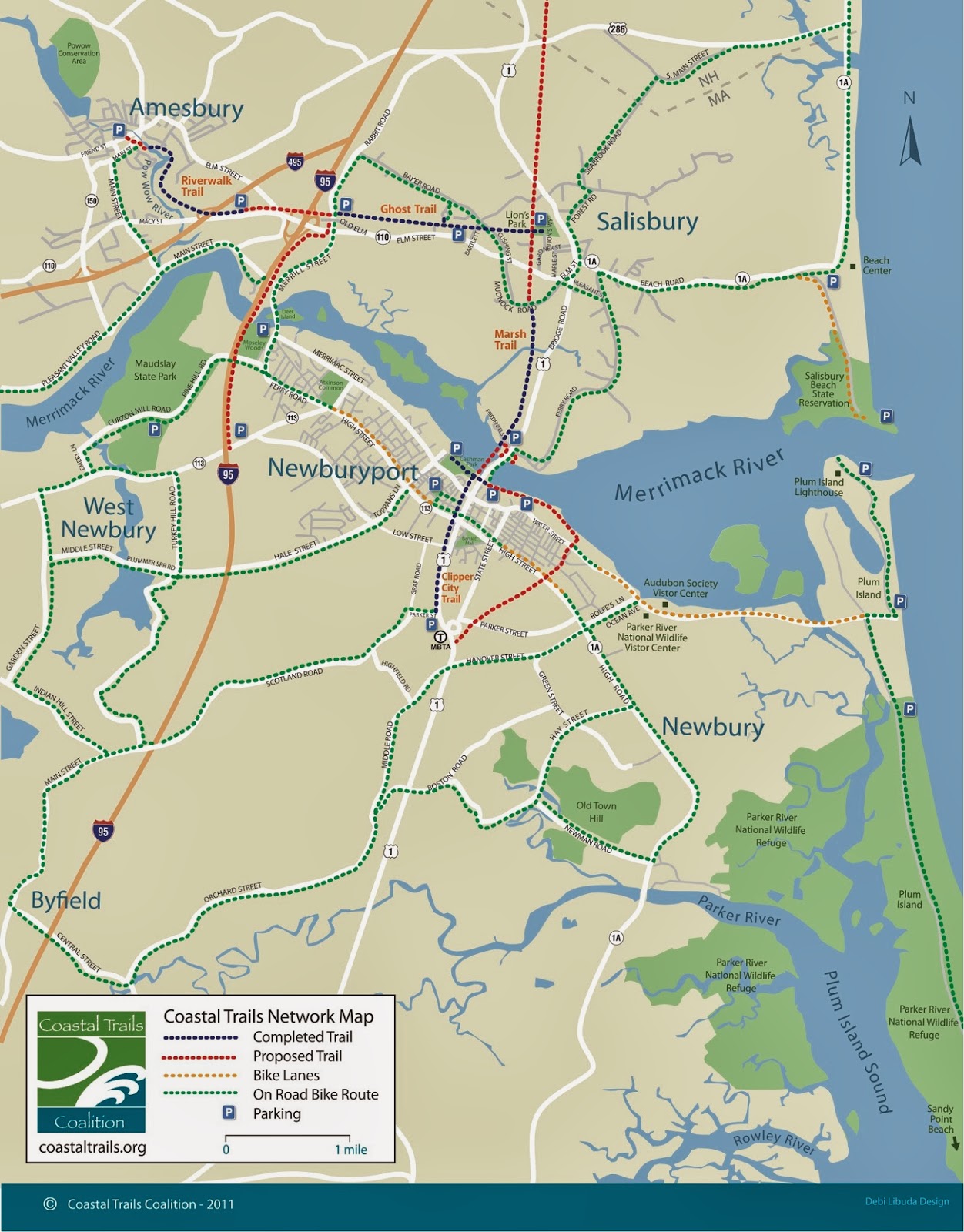 Similarly, the 4.3-mile Danvers Rail Trail (a grassroots project that has transformed an old, unused rail line into an active recreational space) has used technology to link recreational and commercial opportunities, even creating a hide and seek type game with gift cards from local businesses hidden along the trail that require visitors to download a mobile app (as a sidenote, another unused rail spur stretches from Downtown Salem to Peabody and Danvers, allowing for a potential extension of the Danvers Trail to Cedar Pond and the Crane and Waters Rivers).

As one of only 49 National Heritage Areas, Essex County’s many historic assets will continue to play a key role in our economic future. However, more eternal and more vital than any colonial home or ancient artifact is our waterfront. It is essential that our cities and towns work together to make the most of its potential for generations to come.
Posted by Andrew L. Kalloch at 4:00 PM