New England Politics: The Decline of the GOP + Hope for an Age of Independence

“However [political parties] may now and then answer popular ends, they are likely in the course of time and things, to become potent engines, by which cunning, ambitious, and unprincipled men will be enabled to subvert the power of the people and to usurp for themselves the reins of government, destroying afterwards the very engines which have lifted them to unjust dominion.”

“It is not the principled partisan, however obnoxious he may seem to his opponents, who degrades our public debate, but the preening, self-styled statesman who elevates compromise to a first principle.”

The very name of this blog—Bay State Brahmin—is a reminder of the strength of the Republican Party in New England. Brahmin families who once defined the Massachusetts political elite—Cabot Lodge, Saltonstall, Gardner, Adams, Bacon—were all loyal members of the GOP, albeit a different GOP than the current iteration.

Nevertheless, despite the GOP’s recent struggles in New England, the party seems dead set against any “weakening” of its core national messaging, even if it means sure defeat in deep-blue Massachusetts.

That was the clear message sent by the Commonwealth’s GOP last week when it adopted a platform that reiterated the party’s opposition to same-sex marriage and abortion—breaking from the beliefs of the two candidates that hold the Mass. GOP’s best hopes in 2014, Gubernatorial candidate Charlie Baker and 6th District Congressional candidate Richard Tisei.

This platform—out of step with the more libertarian “New England” Republicanism of the Brahmin—will do little to stop the GOP’s fade to obscurity in the region.

Research done by Tom Duvall, a student at the University of Michigan, charts the decline of the Republican Party in New England from the Civil War to the present. As seen here, the share of Congressional seats held by Democrats has approached 90 percent in recent years and the strength of the Democratic vote in Presidential elections has also soared. 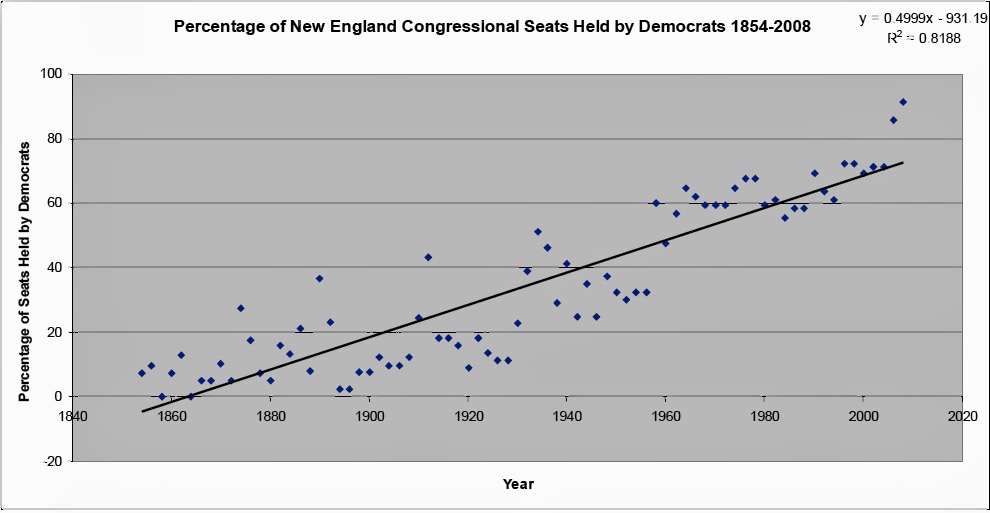 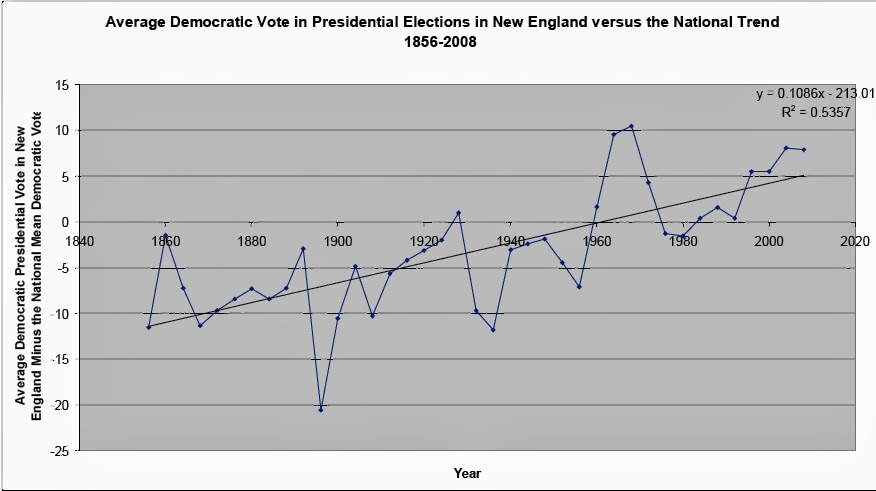 Today, of the 33 Senators and Representatives from New England, 29 are Democrats. Two Senators, Susan Collins of Maine and Kelly Ayotte of New Hampshire, are the lone Republican voices. Interestingly enough, there are also two Independent Senators—Angus King of Maine and Bernard Sanders of Vermont—the only Independent members of Congress in the entire country.

While the GOP continues to shoot itself in the foot in Massachusetts and throughout the region, the success of Independent voices like King and Sanders offers hope for a different kind of politics—not the illusory “post-partisan” era that is oft discussed, but never to be attained—but instead a politics that values inquiry over allegiance, truth over tribute, principle over party.

We see this brand of politics in the small town meetings in New Hampshire every four years and in local town meetings throughout the Commonwealth every day—where the yeoman’s work of selectmen and school committee members is done with little to no regard for party politics. All politics may be local, but we’d all be better off if more politics mimicked local politics.

Indeed, far more troubling than the rise of political parties themselves is the rise of partisan thought which demands rigid adherence to party principles rather than the truth as the standard on which candidates are judged. Officials who dare buck their own parties are tagged as RINOs and DINOs, becoming prey to intra-party challenges by ideological purists.

This trend is disheartening, not because political parties are inherently inappropriate—joining the voices of the many to work toward a common goal is a time-honored tradition in America—but instead because we no longer view parties as means to an end, but as the ends themselves.

A lot changed in the 210 years between George Washington’s Farewell Address and Tom Delay’s speech to Congress before his resignation in 2006. For one thing, the 43 Presidents who succeeded Washington have all been members of an organized political party. More troubling is the fact that politicians no longer feel shame in describing themselves as a “partisan Democrat” or a “partisan Republican.” And why should they? After all, we live in an age in which disgraced representatives like Tom Delay can cast men like Washington as little more than “preening” statesmen who “degrade” debate through their commitment to compromise.

In Have Faith in Massachusetts, President Calvin Coolidge—another famed Bay State Republican—wrote, “Politics is not an end, but a means…So much emphasis has been placed upon the false that the significance of the true has been obscured and politics has come to convey the meaning of crafty and cunning selfishness, instead of candid and sincere service.”

We’d be better off in Massachusetts, New England, and the nation as a whole, if we lived up to Coolidge’s call by electing a diverse group of leaders—if not diverse in party, diverse in mind and spirit; a group that defines “sincere service” as developing new and innovative ideas for the People, rather than how to cast their political opponents in the worst possible light.
Posted by Andrew L. Kalloch at 4:00 PM