From Romance to Realism: Connecting the Boroughs

“What thrills me about trains is not their size or their equipment but the fact that they are moving, that they embody a connection between unseen places.”

Yesterday, Times architecture critic Michael Kimmelman wrote about the need for a streetcar line to connect the burgeoning neighborhoods along the Queens and Brooklyn waterfronts. While some of these neighborhoods (such as Downtown Brooklyn and Long Island City) are well served by transit vis-à-vis the “Manhattan Core,” they lack reliable, efficient options for inter-borough travel (with the notable exception of the ever-maligned but ever-more-popular G train).

In endorsing a streetcar line (nicknamed the “desire line”), Kimmelman admits that buses may provide a “more obvious solution,” but that a bus would lack the “romance” of a streetcar. Kimmelman is nothing if not consistent—his columns on the current and future state of Penn Station often dwell on what was lost in the destruction of the old Penn Station rather than necessarily where the rebuilding of a new “head house” should rank in the pecking order of Midtown Manhattan’s public transportation wish-list.

Now, I’ll admit—as someone who dreams of the California Zephyr and gets excited by National Train Day, more sympathetic to this view, I could not be.

However, there are bolder, more urgent priorities than the “desire line” that the City and State of New York should be focusing on to improve inter-borough service outside Manhattan. Indeed, the best plan of all—the “X” line—would seize on existing rights of way to stimulate investment in neighborhoods beyond the waterfront that could make up the job corridors of New York’s 21st century economy.

The Regional Plan Association first proposed the “X” line, which stretches from the Bay Ridge waterfront to the South Bronx in a semicircle route, in its Third Regional Plan in 1996. And since that time, many folks with far more knowledge of NYC transit than yours truly—from Michael Frumin (whose map is shown below) to Ben Kabak to Andrew Lynch have added to the chorus of voices clamoring for this transformative cross-town line. 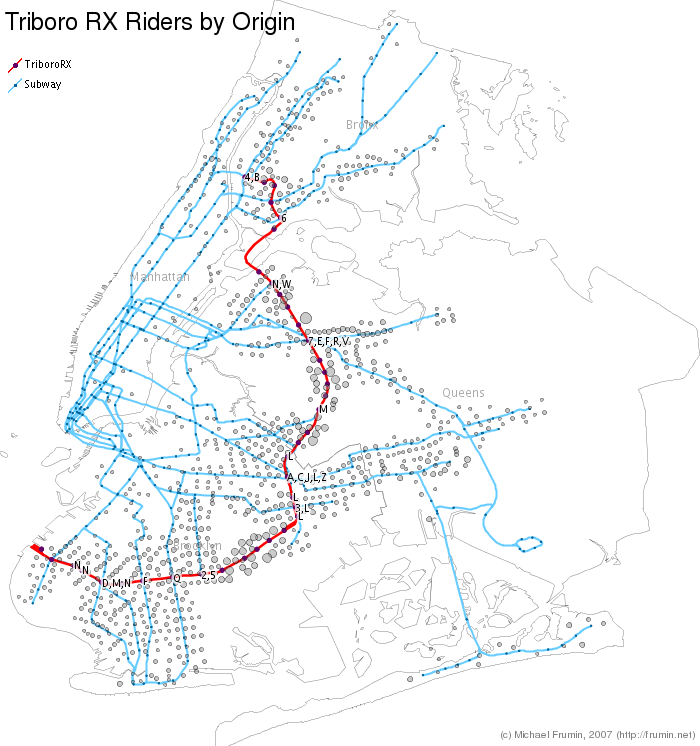 In short, the “X” line would travel along the old Bay Ridge Line, which makes a broad arc through southern Brooklyn from Bay Ridge to Broadway Junction. It would then use the Canarsie Line (L) until it turns towards Bushwick. It would then run through Ridgewood, Middle Village, Maspeth, Jackson Heights, and Astoria before rising onto the Hell Gate Bridge and terminating in the South Bronx.

In 2012, Kimmelman declared, “We have become a city too cynical about big change, resigned to the impossibility of unraveling bureaucratic entanglements, beholden to private interests, inured to commercialism and compromise.”

I agree with this critique—but it is imperative that our response to it be properly directed to maximize scarce resources and build up communities that have traditionally been underserved by transit and are in need of investment for future growth.

This week, the RPA is hosting its annual Assembly with an eye toward its Fourth Regional Plan. While it is beyond dispute that the waterfront districts have benefitted from zoning changes, reductions in crime, and other public efforts over the past 20 years, they have also been able to attract billions in private investment even without ideal cross-borough transit access (though the East River Ferry has significantly improved this service).

As a result, my hope is that the RPA uses this opportunity to make the “X” line a centerpiece of its vision for regional transportation. More than ever before, connectivity outside the Manhattan Core is central to New York’s continued success and few projects hold the potential to bring communities together in support of mass transit like the “X”.
Posted by Andrew L. Kalloch at 8:00 AM