Boycotts: Bravery or Bullying? From Montgomery to Mozilla

“A boycott is, inherently, a blunt instrument. It is an imperfect weapon, a carpet bomb, when all involved would prefer a surgical strike.”

Last week, Brandon Eich resigned as CEO of Mozilla (the company behind the popular web browser Firefox) after a storm of criticism fueled by Eich’s $1000 donation in support of California’s Proposition 8, a ballot measure in 2008 that sought to ban same-sex marriage.

In the days since, an even more interesting debate has emerged about whether the efforts that drove Eich from his position was a great symbol of consumer strength in a democracy, a sure sign that the Republic is doomed, or somewhere in-between.

On the one hand, as New York Times columnist Frank Bruni wrote on Sunday, the very fact that it is becoming unviable for major companies to be led by people opposed to marriage equality is indicative of how “in a great many circles, endorsement of same-sex marriage has rather suddenly become nonnegotiable. Expected. Assumed. Proof of a baseline level of enlightenment and humanity. Akin to the understanding that all people, regardless of race or color, warrant the same rights and respect.”

Andrew Sullivan, the blogger and prominent gay rights supporter, penned a much harsher piece about the tactics that led to Eich’s resignation. “The guy who had the gall to express his First Amendment rights and favor Prop 8 in California by donating $1,000 has just been scalped by some gay activists.” Sullivan went on to note that while Eich was “a victim of the free market in which people can choose to express their opinions by boycotts, free speech and the like” (as opposed to government censorship), the very fact that Eich was forced from office for his political views represented an “ugly intolerance of parts of the gay movement, who have reacted to years of being subjected to social obloquy by returning the favor.”

Controversy about how gay rights supporters should treat gay rights opponents is not new. As I wrote in 2008, following Scott Eckern’s resignation as artistic director of the California Musical Theater after he gave $1000 in support of California’s Proposition 8, it is far from clear that demonizing those we passionately disagree with on one issue, but who we otherwise enjoy so much in common, is the best way to reach our goals over the long-term.

Indeed, while the Civil Rights Movement was frequently fought in state and federal courthouses across America, true, lasting victory was only achieved by taking the fight to the streets, churches, universities, barber shops, lunch counters, and workplaces of America to convince the People of the righteousness of the cause. Popular democracy—not judicial fiat—was essential to solidifying the legacy of the Civil Rights Movement, and the same must be true of the gay rights movement today.

In other words, boycotts—from Montgomery to Mozilla—should be judged by how effective they are in bringing about the underlying change that triggered the boycott in the first place. As English author/artist John Berger declared in his call for a “cultural boycott” of the State of Israel in 2006,

Boycott is not a principle. When it becomes one, it itself risks becoming exclusive and racist. No boycott, in our sense of the term, should be directed against an individual, a people, or a nation as such. A boycott is directed against a policy and the institutions which support that policy either actively or tacitly. Its aim is not to reject, but to bring about change.

Would it have been better to try to convince Brandon Eich of the err of his ways? Probably. But as the quote at the top of this post indicates, the “surgical strike” is not always available to us. 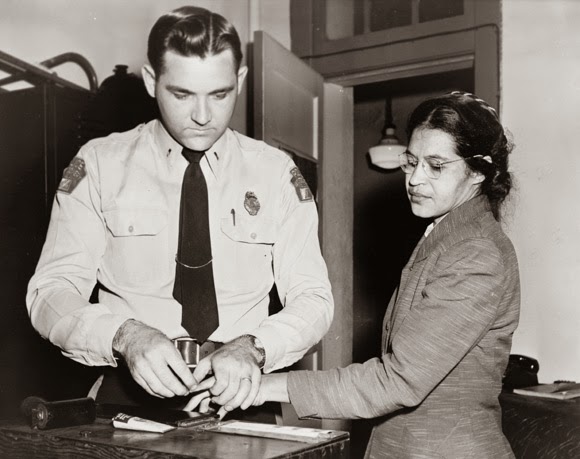 Sure, Rosa Parks could have tried to convince the bus operator of the bigotry inherent in Montgomery’s bus laws. She could have tried to make an appointment with the manager to express her frustration with the apartheid system of Jim Crow. She did neither of those things—not only because they would have been utterly fruitless, but also because the tactic she did choose—civil disobedience followed by an organized boycott—was the best way to bring national attention to the disgrace of segregation.

Parks epic act wasn’t about her commute. It was about every American’s right to be treated equally before the law; just as the uproar over Eich isn’t about him so much as it is about the complete rejection of rank discrimination as a defensible position in American life.

In the end, consumer-oriented efforts to change policies ranging from civil rights to the environment aren’t going anywhere. Just yesterday, the restaurant chain Chili’s cancelled a plan to donate 10 percent of receipts on April 7 to the National Autism Association after outcry about the NAA’s assertion that vaccination may cause/exacerbate autism.

People are free, of course, to agree or disagree with the merits of vaccination (though the scientific evidence linking it to autism is practically non-existent, whereas the very real effects of non-vaccination are well-established), just as they are free to disagree about gay rights.

After all, in a democracy like ours, the embodiment of courage is when one stands his ground knowing there is something to lose. As Supreme Court Justice Antonin Scalia wrote in Doe v. Reed, 130 S. Ct. 2811 (2010), “Requiring people to stand up in public for their political acts fosters civic courage, without which democracy is doomed.”
Posted by Andrew L. Kalloch at 8:00 AM