The "Magic Semicircle": The Future of the Route 128 Corridor

“Route 128 is more than a highway…It is, as the blue signs posted for many years, ‘America’s Technology Region.’”

This week, the Martin Institute for Prosperity published a new report, “Start-up City: The Urban Shift in Venture Capital and High Technology.” Written by University of Toronto/NYU Professor Richard Florida (author of The Rise of the Creative Class), the report finds that while “[s]uburban high tech is not going away…the newest and most innovative developments in the industry are likely to emerge from urban and urban-like locations.”

While the 128 corridor remains, in Florida’s words, a “classic suburban nerdistan,” the highway once known as “the road to nowhere” has lost share of VC funding in recent years to Cambridge and Boston.  Indeed, while the “978” remains the 15th largest recipient of VC funding—with 42 deals worth nearly $350 million in 2012—there is room to grow VC funding on the 128 belt—particularly in Essex County, as shown in the map below.

We can start to answer that question by defining what cities and towns in Essex County cannot do: become dense metropolises like New York City. The infrastructure of the North Shore won’t allow it and the proud history of the Essex County National Heritage Area precludes communities from tectonic shifts in development priorities.

To state the obvious, Northeast Massachusetts can’t compete with New York and San Francisco on the playing field of the “global city.” Instead, our region must leverage its unique assets to drive growth in a way that shows fidelity to history and takes advantage of new modes of suburban living that emphasize mixed-use, sustainable neighborhoods.

We already have models of what these walkable suburban centers can look like. Salem and Lynn earn relatively high scores from WalkScore, but when you drill deeper into the mapping, it is clear that the downtowns of these ancient cities are extremely walkable. Not coincidentally, these downtowns are located near train stations that can whisk residents to Boston in about a half hour.

In recent years, development throughout NE Mass has focused on walkable neighborhoods and live-work environments. As stated in the 2009 Bridge Street Revitalization Plan prepared for Salem, “The Bridge Street Neck neighborhood should be an active mixed-use neighborhood, incorporating lively commercial and residential areas. The neighborhood should have a safe and enjoyable pedestrian environment that connects its different amenities and serves its residents and businesses.” The City of Beverly has also promoted its walkable downtown in its effort to woo business to the home of the Panthers.

Governor Deval Patrick must have been listening. Three years later, he announced a plan called the “Compact Neighborhoods Policy” which calls for the construction of multi-family homes, rental apartments, and starter homes near jobs, transit, and city and town centers. Providing incentives to cities and towns to engage in such “smart growth” is one of the keys to ensuring the continued vitality of the suburban ring, not just the entrepreneurial engines of Boston and Cambridge.

In addition to embracing smart growth and walkable, mixed-use neighborhoods, Essex County also needs to do more to capitalize on the creativity of our college students. Gordon College in Wenham, Endicott College in Beverly, Salem State University in Salem, Northshore CC campuses throughout the region, Merrimack College in North Andover—each of these institutions of higher learning should be nodes for innovation on the North Shore. 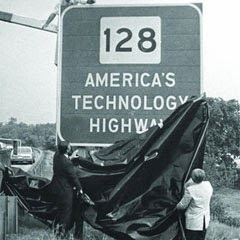 Public-private partnerships that position incubators and affordable housing near campuses (linked to downtowns with free/low-cost bus/van transportation) can help to ensure that graduates not only see Essex County as a great place to learn, but also as a prime location to start a business and raise a family. Salem State’s Enterprise Center is a terrific start, but more can be done to harness this enduring asset. In particular, universities should actively partner with existing private sector incubators with proven results, from Newburyport’s CleanTech Center to Beverly’s North Shore InnoVentures.

This last element leads me to my final ingredient for the success of the Route 128 corridor—preserving the natural treasures and community assets that make Essex County such a sought-after place to live. This means protecting our beaches, from Salisbury and Crane to Good Harbor and Preston, as well as taking advantage of our history to drive tourism.

But it also means continuing to invest in our schools, many of which consistently rank among the best in Massachusetts. Salem Academy Charter School ranks 5th in the State and 139th in the nation, serving a diverse student body where 2 in 5 students are economically disadvantaged. And last year, Masconomet Regional High School ranked in the top 15 in statewide testing on math and science.

Route 128 may no longer be known as “America’s Technology Region,” but on the North Shore, it remains a critical job corridor in the modern innovation economy—one that can and should be exploited to transform the ancient industrial cities and shipbuilding ports of Essex County into engines of creative class growth.
Posted by Andrew L. Kalloch at 8:00 AM