Transportation Tech: From the Mass Pike to the Friendly Skies

Few things are more frustrating than sitting in traffic at a tollbooth, taxiing for takeoff for hours, or standing on crowded trains directed by century-old switches. But what if I told you that we had technologies at the ready to address each of these problems, only to have failed to adequately seize on their potential?

Last week, the Globe profiled forthcoming changes to the Mass Turnpike in Allston, noting that straightening the turnpike will improve safety, smooth traffic, and free up 60 acres of land, some of which is prime territory a stone’s throw from the shores of the Charles River.

Today, I want to focus on one particular aspect of the plan—the introduction of 100 percent cashless (electronic) tolling on the Pike—as well as several other transportation technologies that will pay long-term dividends if we commit to investing in them today.

As the map below from the Pennsylvania Turnpike Commission shows, cashless tolling is being embraced by states across the country as a way to reduce congestion (and the pollution/productivity effects associated with it) and save money on toll collection that can make a small, but meaningful contribution to rebuilding our nation’s roads and bridges. For instance, the Golden Gate Bridge’s new cashless tolling system is expected to save $16 million over eight years (the bridge faces a $66 million budget deficit over the next five years). 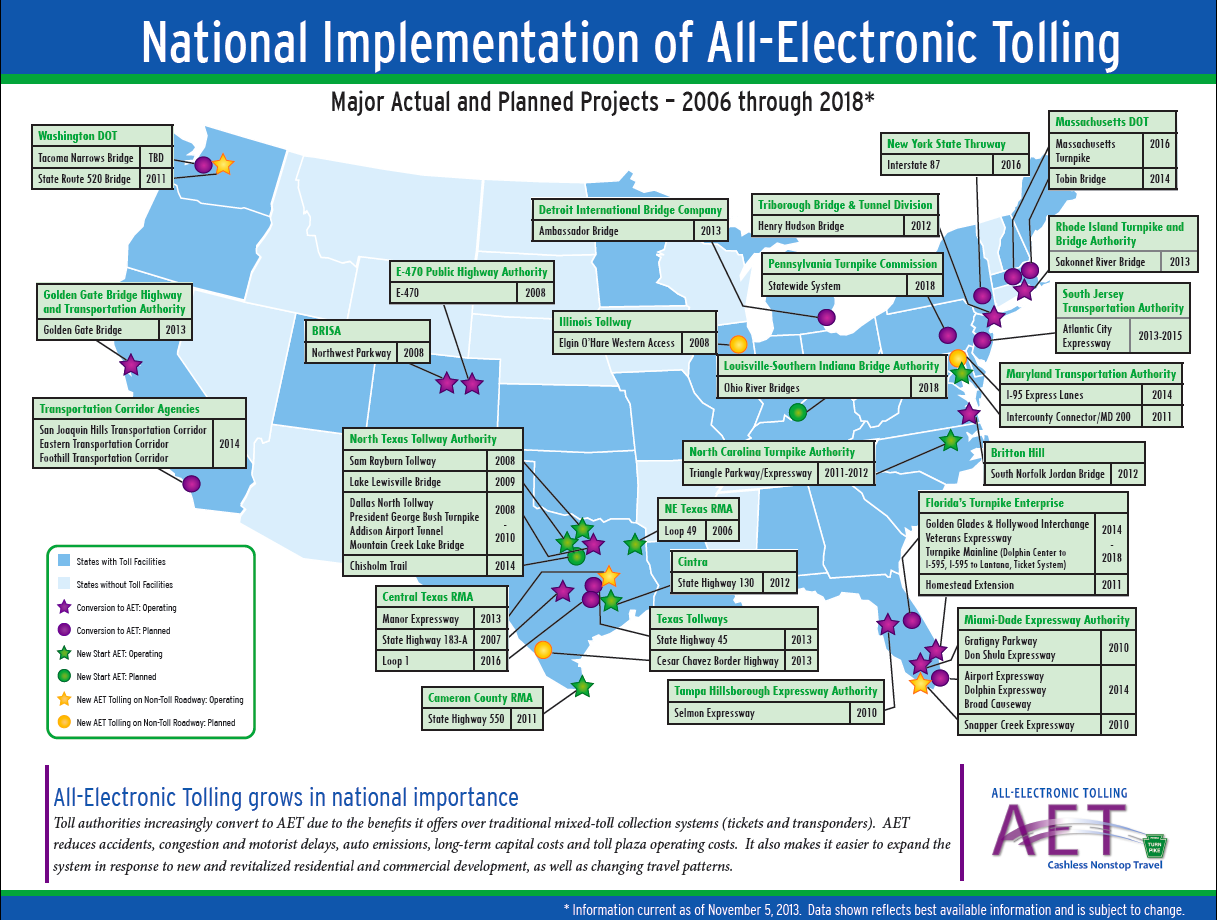 This is particularly important in light of the troubles with the national Highway Trust Fund, which is fast approaching insolvency thanks to a gas tax that hasn’t budged in 20 years and the proliferation of more fuel-efficient vehicles.

Cashless tolling should be a requirement for any new federally funded transportation project that includes tolls and the Highway Trust Fund should incentivize states to adopt cashless tolling by providing capital grants for implementation of new systems and cost-sharing arrangements with states.

Another critical transportation technology that has encountered a litany of challenges in recent years is the Federal Aviation Administration’s rollout of Next Generation air traffic control (“NextGen”).

The FAA’s largest-ever procurement, NextGen would replace radar-based ground control with GPS navigation and require airlines to adopt technology that allows pilots and air traffic controllers to have improved access to real time data, allowing planes to fly more direct routes closer together, improving efficiency and productivity in our nation’s skies. When completed, the project is expected to yield a system that can handle three times more air traffic while reducing FAA’s operating costs.

In addition, NextGen is expected to yield the following benefits by 2030:

However, as the Inspector General of the U.S. Department of Transportation recently found, the FAA has failed to embrace NextGen’s potential. This includes a failure to rapidly introduce GPS capabilities at many of the nation’s busiest airports, including those in the NYC-metro region that account for nearly half of all flight delays nationwide.

The list of transportation technologies that are underused goes on and on. In New York, Albany continues to stonewall the City’s efforts to expand the speed camera program—a critical part of Mayor de Blasio’s “Vision Zero” initiative (though Governor Cuomo insists that the issue will be taken up after the holiday recess).

Few cities—including New York—have committed to transforming antiquated street parking with technology (like that in use in San Francisco) that promises to reduce congestion, improve safety (with fewer cars circling for spaces/double parking), and more appropriately value public space.

And we continue to rely on mechanical, switch-based subway systems constructed in the early 20th century instead of using Communication Based Train Controls (CBTC), which offer improved reliability, lower costs, and greater efficiency. Despite the fact that systems around the world have implemented CBTC, only a single NYC subway line (the L) currently has CBTC, with the 7 slated to have it installed by 2017. Worse, under the current MTA capital needs assessment (2015-2034)—a plan funded almost entirely with debt—it will take until the 2030s (or beyond!) for the entire NYC system to have CBTC installed.

Leveraging technology in transportation will pay for itself. But that will only happen if we generate strong, grassroots support by making these esoteric projects “real” to the public. Indeed, Americans have shown time and again that they are willing to fund infrastructure improvements when they understand precisely how they stand to benefit.

Global Gateway Alliance is trying to generate public awareness of airport improvements in NYC, just as the Straphangers Campaign has long advocated for the interests of bus and subway riders. What’s needed next is recognition by elected officials that the benefits of these technologies will flow to constituents in every corner of the city/state/nation.
Posted by Andrew L. Kalloch at 8:00 AM