This Land is Whose Land? From NYCHA Housing to Nevada’s Ranches

Was a high wall there that tried to stop me
A sign was painted said: Private Property,
But on the back side it didn't say nothing —
This land was made for you and me.

In the summer of 2000, our family rent-a-car emerged from the Grand Tetons and traveled down National Highway 26 into the town of Jackson, Wyoming. As we sped along (the urgent need for pancakes and flat, clear terrain propelling us forward at speeds that would be reckless at best on the I-95 corridor), I stared out the window and watched the cows chewing their weight in grass on federal property (about half of Wyoming is owned by the U.S. Government—see map, below).

Curious about the agreements that allowed for such private use of public property, I asked our waiter at the local diner who owned the cows and how much he/she paid to have them grave on “federal property.” The waiter, already put off perhaps by a New Englander wearing his ever-present Sox jacket, set his pen and paper on the table, looked at me, and declared simply, “That’s our land.”

I was firmly committed to putting pancakes over politics, so I demurred further argument, certain that whoever the “our” was didn’t include me. 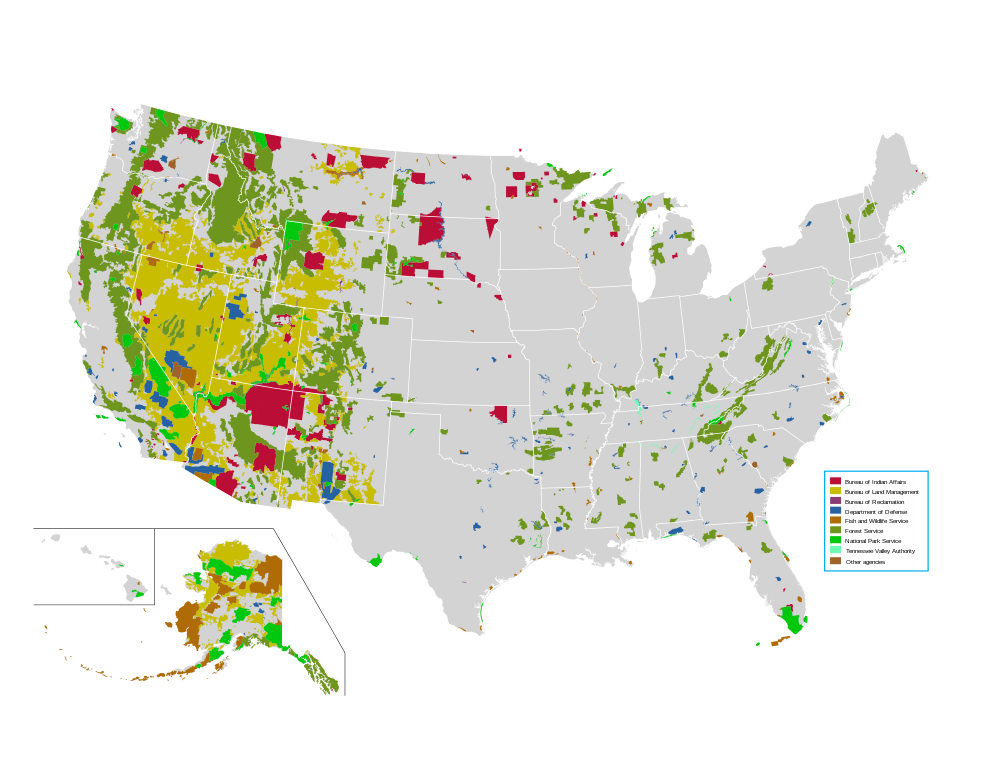 This month, a dispute over federal grazing fees charged to Western ranchers once again erupted, with armed civilians taking up positions against Bureau of Land Management rangers who, pursuant to a court order, attempted to confiscate 500 cattle owned by Cliven Bundy, who has been illegally grazing his herd on public land since 1993.

Not only is there no agreement on what taking up arms against the federal enforcement of a court order should be called, there isn’t even consensus on the facts underlying the case. Washington Post columnist Marc Theissen decried Reid’s “domestic terrorist” comment, stating that “defending your property against a paramilitary force of armed federal agents is not the equivalent of blowing up a federal building or sending letter bombs” (emphasis added).

Indeed, while Bundy’s abhorrent comments on race and his unwillingness to pay below-market grazing fees to the Federal Government have given him 15 minutes in the national spotlight, what his case and the story of the diner in Jackson are really about is the very nature of property rights—not just in the American West, but across the country.

Indeed, I’ve spent the last week pondering Theissen’s remark, trying to come up with an East Coast equivalent to understand the “ownership” Bundy and people like him feel over land whose title is in our collective name. As it turns out, we have a pretty good analog right here in New York City in how we try to grapple with the difficult concept of “home” as it relates to scarce and precious public housing resources.

This month, NYCHA General Manager Cecil House testified before the New York City Council about the Housing Authority’s “rightsizing” plan. As the wait list for public housing continues to grow (in 2012, NYCHA projected that nearly one in three units (55,000) were “underoccuiped”, while the wait list swelled to 160,000 families), NYCHA has sought to optimize apartment usage by “transitioning families to apartments appropriate for their needs.”

As House stated, “Rightsizing does not only improve the quality of life of current NYCHA residents but also provides housing to more New Yorkers on our waiting list.”

The rightsizing issue has been extremely controversial, largely because its very nature necessitates removing people from their homes and placing them in smaller apartments (particularly older residents whose children have moved out). NYCHA is, after all, a public resource and rightsizing is absolutely needed to ensure that new families can take advantage of the opportunities it provides.

However, if our homes are indeed our castles, it is also understandable as to why ranchers or public housing tenants would feel ownership, the deed notwithstanding.

In situations like these, where emotions run hot and mistrust lurks around every corner, there are few good choices. However, our system of government is rooted in the consistent application of the rule of law, rather than the fallible whims of officials.

Indeed, just as the BLM didn’t attack Bundy for who he was, but for what he did (violate the law by refusing to pay a standard fee), so NYCHA’s rightsizing is not directed at individual residents as punishment, but is instead enforced as part of a contractual agreement entered into by tenants with the Housing Authority.

As long as the system itself is fair and people have the opportunity to argue their case before a neutral arbiter, that’s all we can ask in a Republic. Taking up arms against that effort is an affront to a government of laws itself—a government that is fallible, but far better than the alternative.
Posted by Andrew L. Kalloch at 8:00 AM